Tight race in Nicolet-Bécancour and Trois-Rivières

The debates are in full swing and the effects won't be reflected in polls until a couple of days after tomorrow night's final contest between Pauline Marois and François Legault, but a few riding polls have been released over the last few days for two interesting ridings and the region of Saguenay-Lac-Saint-Jean. 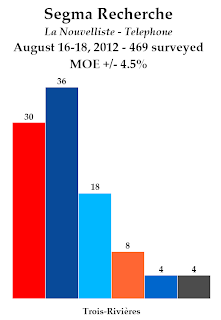 Trois-Rivières is a particularly notable riding because of the recent controversy over the PQ's policy on the crucifix in the National Assembly and Saguenay mayor Jean Tremblay's comments about the Parti Québécois candidate. Djemila Benhabib, an author who lived in the Outaouais region and the target of Tremblay's comments, was also parachuted into the riding.

Nevertheless, 36% of voters in the riding say they will support her (80% saying that Tremblay's comments have no influence on their vote). That gives her a six-point lead over Danielle St-Amand, the incumbent Liberal MNA. The CAQ trails with 18% while Québec Solidaire is further behind with 8%.

The projection currently has the PQ with 38% of the vote in the riding to 30% for the Liberals and 22% for the CAQ. While this shows the model is working well, it is also interesting that despite all of the local issues and controversies the riding is behaving generally as expected. 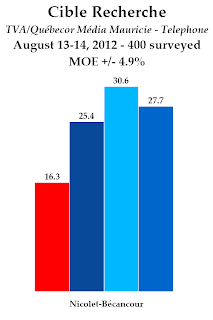 Nicolet-Bécancour was a bit of a mystery, though. The riding is where Jean-Martin Aussant, leader of Option Nationale and former PQ MNA, is running. The presence of an incumbent MNA from a new fringe party makes the riding very difficult to predict. How much of the PQ's vote would swing over to ON?

The projection currently has the CAQ at 34%, the Liberals at 25%, the PQ at 22%, and ON at 18%, within the margin of error of the poll for the CAQ and PQ, while the ranges were wide enough to envision the poll's result for Aussant. That it pegged the CAQ as leading in the riding is a good sign, but figuring out the proportion of the vote that Aussant would be able to hold on to was always going to be difficult, as the model can only base itself on previous cases in other elections. The poll will be incorporated into the projection with the next update and will put Aussant within range of winning.

A huge proportion of respondents (42%) were undecided, so the race in Nicolet-Bécancour could go any which way. But it is interesting that Aussant, first elected under the PQ banner in 2008, has been able to hold on to so much of his vote. It puts him in a very good position - unless François Legault manages to increase his party's support significantly province-wide. 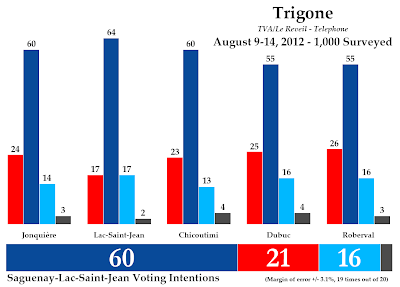 Lastly, we have (another) series of riding polls for the Saguenay-Lac-Saint-Jean region, this time by Trigone. I am not familiar with this firm.

Trigone was in the field on most of the days that Segma was and the results match up very closely, particularly considering the margins of error applicable to sample sizes of between 176 and 215 people per riding (Segma polled about 600 people per riding).

The poll shows the PQ with a very wide lead across the board, including Dubuc where the Liberals are the incumbent, and 60% support in the region as a whole. This backs up the results of Segma and suggests that Léger's small-sample regional result (which showed a much closer race, though still a PQ lead) was the odd-man out.

All of these polls are pre-debate, so things could change dramatically over the next few days. But these results certainly don't bode well for the Liberals' chances in francophone Quebec.
Posted by Éric at 9:13:00 AM