A dearth of polling since the writ was dropped last Wednesday left us all in purgatory, unable to determine whether the news of the first week of the campaign was having any real effect. With a new Forum poll for The National Post out today, however, it would appear that François Legault has made up a lot of the ground he had lost over the last few months. 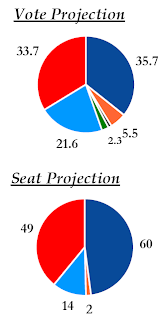 Nevertheless, the Parti Québécois remains on top. They have dropped 2.3 points to 35.7% in the projection, while the Liberals have fallen three points to 33.7%. The Coalition Avenir Québec is the culprit, as they have gained 6.3 points to hit 21.6%, while Québec Solidaire is up 0.7 points to 5.5%.

The effect on the PQ is negligible, as they remain unmoved with 60 seats. The Liberals, however, have dropped eight seats to sink to 49, while the CAQ is up seven to 14 and Québec Solidaire is up one to two seats.

Québec Solidaire can win one or two seats, while Option Nationale still has a hope of electing Jean-Martin Aussant.

On the subject of Option Nationale, the projection currently has them at only 0.1% support. That is, of course, unrealistically low. But with the latest poll from Forum showing 0% support for other parties (they don't include ON in their polls) this is the result. Léger Marketing is supposed to have its new numbers in Le Devoir tomorrow, according to what Jean-Marc Léger said on Twitter, so we can expect to see their support jump. Léger does include ON in their polling.

The CAQ's increase in support is quite dramatic throughout Quebec, in large part because their support among francophones jumped by 7.4 points. Their only sluggish region is Montreal itself, where the party saw a gain of only one point. They stand at 11% on the island.

Elsewhere, however, they were up big: 2.5 points in eastern Quebec, three points in western Quebec, 5.3 points in the Montreal suburbs, 5.9 points in central Quebec, and a massive 9.7-point jump in Quebec City. That increase has put them at 33.3% in the projection in the capital, just behind the Liberals (down 2.5 points to 37.2%).

Both the Liberals and the PQ have taken a hit. Their drops in support in Montreal and western Quebec were quite small, but the PQ lost more than three points around Montreal, in Quebec City, and in eastern Quebec. The Liberals, meanwhile, had losses of more than four points in the Montreal suburbs and in central Quebec, where the race is incredibly tight: 33.2% for the Liberals, 32.6% for the PQ, and 25.4% for the CAQ. That puts almost every seat in the region at play, as the Liberals could win between one and 15 seats, the PQ between three and 13, and the CAQ between one and nine.

Québec Solidaire had a 2.4.-point increase in Montreal to put them at 10.8% (and capable of electing both Amir Khadir and Françoise David), but they also had a corresponding 2.6-point slip in Quebec City, where they have only 3.3% projected support. 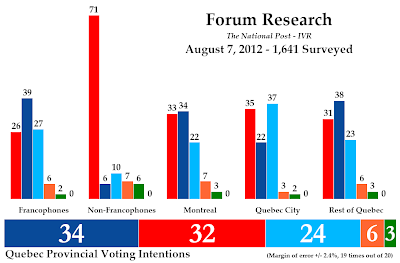 The Forum poll, taken on Tuesday and so well after Jacques Duchesneau's candidacy for the CAQ was announced, showed statistically significant shifts in support for all four top parties: a drop of five points since Aug. 1 for the PQ and six points for the Liberals, as well as a two-point gain for QS and a 10-point surge for the CAQ.

But statistically significant leads are hard to identify: only the PQ's advantage in the "rest of Quebec" and among francophones, and the Liberal lead among non-francophones. It will be interesting to see if the recent courting of anglophone voters will have a positive effect on the CAQ's support. It is unlikely that Léger's poll, apparently completed last night, will be able to record much of that.

On the personal front, things are also looking up for Legault. Jean Charest's approval rating dropped by three points, widening the gap between his approval and disapproval scores by a total of six points (disapproval stands at 63%). Pauline Marois's approval/disapproval gap widened by four points (35% to 53%) while Legault's shrank by 14 points. His approval is up nine points to 39% while his disapproval is down five points, also to 39%. It has been awhile since one of these leaders had a net positive rating, and Legault is on the cusp of one. Still, 22% of Quebecers are not sure of what they think of him(down four points), suggesting things are still very much up in the air.
Posted by Éric at 11:44:00 AM