Liberals and Tories on track to hold seats in by-elections

Kitchener-Waterloo and Vaughan are scheduled to hold their provincial by-elections on September 6, and polls by Forum Research suggest that voters in each riding are likely to re-elect the party they chose in the October 2011 general election. 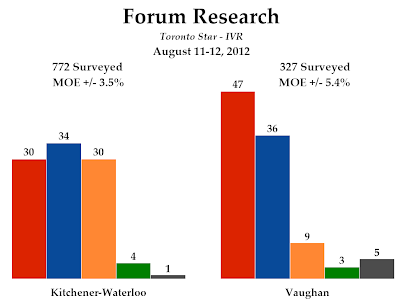 In Kitchener-Waterloo, the Progressive Conservative candidate Tracey Weiler has the support of 34% of voters, a gain of two points since Forum was last polling this riding in the spring. The Liberals are down nine points to 30%, while the New Democrats are up 10 points to 30% as well.

The Greens are down three points to 4%.

This is quite a change since Forum's last poll. The Tories have held firm but Liberal candidate Eric Davis has seen his fortunes drop dramatically, putting him in a tie with NDP candidate Catherine Fife. But this is a close enough race that anyone could win - Andrea Horwath has a better approval rating than either Dalton McGuinty or Tim Hudak in the riding, while McGuinty scores above Hudak. That has the potential to even things out on election day, and the By-Election Barometer forecast now pegs the riding as a Likely PC riding, rather than a Strong PC.

In Vaughan, what was a close race is looking more like a Liberal landslide. Liberal Steve Del Duca has 47% support, up seven points from Forum's Aug. 2-3 poll. PC candidate Tony Genco is down five points to 36%, while the New Democrats are down six points to 9%.

But Forum also asked voters whether they were enthusiastic about voting. Turnout is absolutely key in a by-election, and with 39% of Vaughan and 45% of Kitchener-Waterloo residents saying they were "very enthusiastic" we appear to have a good measure of who may actually head out to vote. 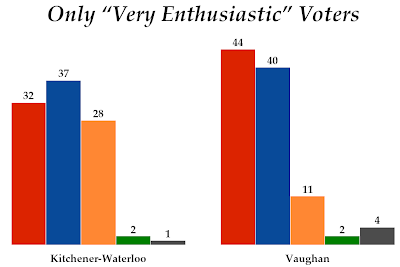 When looking at only those who said they were very enthusiastic, the races in both ridings transform a little.

In Kitchener-Waterloo, the close three-way race looks more like a two-way race as Liberal and PC voters turnout in greater numbers. Not surprisingly, Green support plummets and the NDP also takes a hit. The Tories still hold the advantage, however, extending their lead by one point.

Liberal voters in Vaughan are not as enthusiastic as their Tory and NDP counterparts and as a result the 11-point edge shrinks to only four points as the Tories get their supporters to the polls. The Liberals still come out ahead, however, with 44% to 40%. But this does suggest that Vaughan could be a closer race than expected.

It appears that the incumbent parties have the edge in Kitchener-Waterloo and Vaughan with less than a month to go before the vote. That means a status quo in the Legislative Assembly with the Liberals just short of a pseudo-majority government. However, neither race appears to be a slam dunk for either party. Kitchener-Waterloo is a very close contest that even puts the NDP in the running, and voter enthusiasm in Vaughan points to a potentially narrow margin as well. The next few weeks of campaigning could be extremely important.
Posted by Éric at 8:57:00 AM