The most recent Angus-Reid poll had the same kind of poll, giving respondents the ability to attribute certain qualities to Stephen Harper and Michael Ignatieff. Attributes like caring, efficient, secretive, out-of-touch, etc. were among the options.

Grouping the attributes into "good" and "bad", and then averaging out the totals, we get an indication of how many people consider these two leaders to have good or bad qualities. Here are the results, with the change from the last poll: 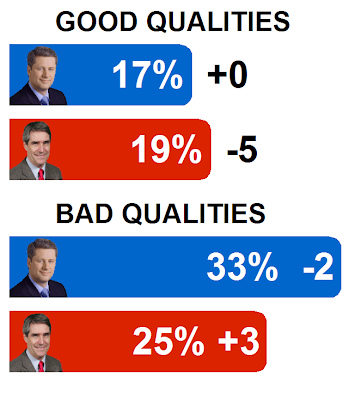 Taking the top five answers, we get a picture of what people think of the two leaders. Harper is considered to be secretive (49%), arrogant (45%), out-of-touch (41%), intelligent (41%), and boring (38%). Not exactly a stellar review. But Ignatieff's is not much better, and is actually quite similar. He's considered intelligent (51%), arrogant (45%) out-of-touch (35%), boring (30%), and secretive (23%). Apparently, Canadians aren't enamored with either of our options for Prime Minister.

It's unfortunate the poll wasn't extended to Jack Layton and the other leaders. It would've been interesting to see whether Layton's image improved with the dip in Ignatieff's numbers.
Posted by Éric at 9:38:00 AM