Last month, I wrote an analysis of the political situation in and the electoral history since 2004 of British Columbia. Today, I'm going to look at Alberta.

Alberta has been the Conservative homeland for some time now, and it is one of the most secure regions of the country for any party. Back in 2004, in their first election as a unified party, the Conservatives won 26 of the 28 seats in the province. The Liberals took the other two. In 2006, the party did even better and swept Alberta. Then, in 2008 the Tories won all but one of the 28 seats, with the New Democrats pulling off one of the biggest upsets of the evening with a win in Edmonton.

With such Tory supremacy in the province, a regional breakdown is not very useful. Nevertheless, three regions can be identified in Alberta: Edmonton, Calgary, and everything else.

Rural Alberta is a deep Tory blue, and its 12 seats have been swept by the Conservatives in every election. This region provides some of the largest majorities in the country. The Conservatives are so dominant in this region that in only one riding has one of the other parties earned more than 10,000 votes - the Liberals in Lethbridge in 2004.

Calgary is also no contest, with the Conservatives winning all eight seats in each of the past three elections. Here again, the other parties have not managed to put up much of a fight, though the Liberals have shown some life in Calgary West.

Edmonton is a bit more competitive. In 2004 the Liberals elected two of their candidates in the provincial capital, but were wiped from the map in 2006 by the Tory sweep. In Edmonton-Strathcona, a riding that has always been good for the party, the NDP upset prominent Conservative Rahim Jaffer. The Liberals might have some hope for Edmonton Centre, as they have performed well there in the past. 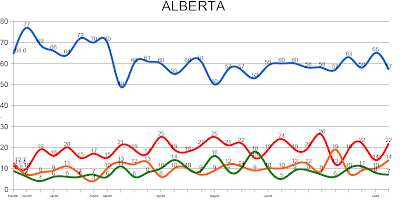 Now that the history has been gotten out of the way, it is time to look at the opinion polling trends since the 2008 election. The Conservatives, of course, dominate and there is a clear and significant gap between them and the other three parties. The Tories have polled between 49% and 77%, with their strongest results coming between December and March, especially during the coalition days. Since the mid-March period the Conservatives have stabilised at around 60%, with very little variation. At these levels, a sweep isn't out of the question, though currently the party is projected to win 26 seats and 60.2% of the vote. The Tories don't have much work to do in this province - virtually anyone under the Conservative banner is a shoe-in.

The Liberals have - just barely - kept themselves ahead of the NDP and the Greens. They've polled between 10% and 26%, a significant variation that puts them somewhere between complete irrelevancy and capable of winning two or three seats. There has not been much of a noticeable trend, but the Liberals did see a gradual rise from December to May, where the party started polling in the 20s. Since then, the Liberals have stagnated, with even a tiny trend downwards. But, they are putting themselves back in the territory of the 2004 election, when the party won two seats and 22% of the vote. They are currently projected to win two seats and 18.4% of the vote. The Liberals need to concentrate on Edmonton.

The New Democrats have straddled the 10% line for the entire period from December to today. Very little trend is discernible, except that the NDP has not polled anything less than 7% since the beginning of April. Before that time, polls could be as low as 4% for them, though they also saw highs of 14%. The party is currently projected to win no seats and 11.3% of the vote. All work must be done to keep Edmonton-Strathcona. The rest of the province can be ignored.

Finally, the Greens have done surprisingly well in the province. They've polled anywhere from 4% to 18%, and have more or less maintained themselves somewhere around 10%. From the beginning of April to the beginning of June, the Greens were competing very strongly with the NDP for third spot, and even supplanted the Liberals for second in one poll. They've since fallen back to earth, but a repeat of the strong 8.8% result in 2008 looks quite possible. The party is projected to win no seats and 9.0% of the vote. The Greens shouldn't hold any illusions of a seat win in Alberta, but could pull out a moral victory by beating the NDP.

To sum up, people won't be watching Alberta on election night. But Edmonton could result in a few surprises.
Posted by Éric at 9:51:00 AM