Ipsos-Reid has released a week-old poll that shows some very different results than those we have been seeing lately. 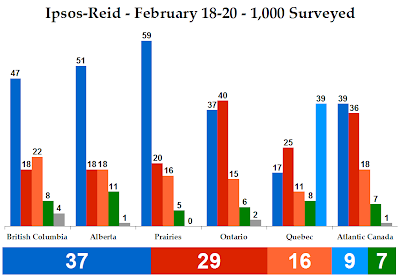 Since their January 19-21 poll, the Conservatives have gained three points (37%), the Liberals have lost two (29%), and the NDP has lost one (16%). The Greens have also lost one and the Bloc is stable, nationally.

Anyway, to the regionals.

In Ontario, the Liberals have gained two points and are at a very strong 40%. The Conservatives remain stable at 37%, as do the NDP at 15%.

In Quebec, the Bloc Quebecois gains two points to reach 39%. The Liberals are down five (25%), and both the Conservatives and NDP are up two (17% and 11%, respectively).

Then the MOE comes into play. In British Columbia, the Conservatives are up 11 points to 47%, while the Liberals are down six (18%) and the NDP is down five (22%). Considering how close the race has been in BC since the beginning of the year, these numbers mark a huge change.

When a poll is at odds with others taken at the same time, and shows huge variations like this, we can't help but feel the need to wait for some more corroborating results. This is the problem with releasing polls more than a week after polling stopped - it gives the impression of movement when instead, had it been released a few days after the end of polling, we would have been discussing why the polls are so different from one another. 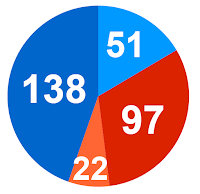 The poll also asked who would make the best Prime Minister. Stephen Harper received 46% (and reached 78% in Alberta), Jack Layton received 33% (53% in Quebec), and Michael Ignatieff had 21% (26% in British Columbia). This seems to demonstrate that people don't vote for leaders.
Posted by Éric at 8:50:00 AM