Polling voting intentions is not the same as polling actual voting behaviour. Answering a poll is very different from voting, something that you do only 10 or 20 times in your life. While that last news clip might have convinced you not to vote for that guy, when election day comes you may decide that you actually prefer that guy's party to the other guy's (or gal's).

I've been thinking about how to reflect this factor in the projection model. Originally, I had thought that my inclusion of the last three election results would act as a bit of a guide wire for my projection. But seeing the Green Party at over 10% leads me to believe that I may need to look into other methods of predicting voting behaviour based solely on polls.

So, I took a look at the last three elections, and how the polling compared to the actual results. I did something like this back in October 2009, and the conclusion I drew was that there wasn't enough data. While I'm still not happy with the amount of data I have to use, I've reversed my decision not to include some method to reflect this in the projection model.

The following chart was done-up for that post, and it is still relevant. 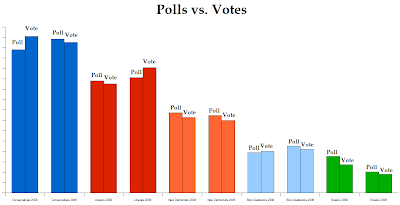 This shows how things generally even out for the Liberals and Conservatives, but also that the NDP and Greens tend to over-perform in polls.

But, you say, people change their minds in a week. How about three days? The difference is negligible: 110% for the Conservatives, 101% for the Bloc, 99% for the Liberals, 94% for the NDP, and 72% for the Greens. However, we can reasonably assume those last three days to be more accurate, so these are the numbers I will be using. Nevertheless, I think it interesting that the average polling results over the last seven days is more or less the same as the results over the last three days. It makes you wonder when is the point that voters make up their minds.

But why punish these parties for what the pollsters have done in the past, much of it explained by the margin of error? After all, the next election might be completely different. Polling methods could change or the pollsters could simply be luckier. So, I've halved those factors to come up with a number that I am comfortable with.

The popular vote projection, then, will now include this voting-day factor (though I haven't added it yet to the charts at the top of the page yet).

Note, this factor will not be added to the regional results, as the margins of error are much larger and the inclusion of past electoral results minimizes the importance of this voting day effect.

With this new factor weighed into the projections, the popular vote you currently see at the top of the page turns into:

I am far happier with those numbers, but I am open to suggestions as to how I can best deal with this issue.
Posted by Éric at 10:26:00 PM