The NDP Resurgence in Quebec

From the depths of 1.5%, the New Democrats under Jack Layton have roared back to prominence in Quebec, earning 12.2% of the vote in the 2008 election and electing one MP in the riding of Outremont. But this is not a new phenomenon.

The party has three times gotten into the double digits in Quebec: in 1965 under Tommy Douglas (12.0%), in 1988 under Ed Broadbent (14.4%), and in 2008 under Layton. But while Layton's performance was part of a consistent growth in support for the party from 4.6% in 2004 and 7.5% in 2006, both Douglas and Broadbent presided over spikes of support after some middling, but consistent, performances. 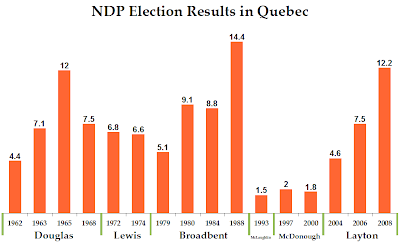 Douglas's average in four elections was 7.8%. Broadbent's was 9.4% in the same amount of elections, while Layton's has been 8.1% in three. So, we can argue that Jack Layton is performing as well in Quebec as his two illustrious predecessors have performed.

But things were bad under Lewis (6.7% average in two elections) and they got even worse under McLaughlin (1.5%) and McDonough (1.9% in two elections). Part of their sorry performances can be blamed on the emergence of the Bloc Québécois, but throughout the 1990s the NDP was virtually non-existent in Quebec, and even Layton's 4.6% in 2004 was nothing much.

So what has Layton done to bring his party back to a respectable position in Quebec? For one, out of all of the party's past leaders, he is probably the most comfortable in French. And he has done this in a much more difficult climate than either Douglas or Broadbent had to deal with. The Bloc Québécois shares a lot of the NDP's social democratic values, and eats up about 40% of the vote in the province. From what "second choice" polls have shown us, if the Bloc did not exist Jack Layton and the NDP would be competing for a leading place in the province.

But where has this growth come from? And how does it compare to previous elections?

It's plain from this chart below that the NDP has grown throughout the province since Jack Layton's first election in 2004. In no one region did the NDP lose support. In two regions, on the South Shore (west and southwest of Montreal) and in the Laurentides, the party's support increase four-fold. It increased by three times in Chaudière-Appalaches, the Cantons de l'Est, Mauricie-Laurentides, and Montérégie. So this is growth across the board. 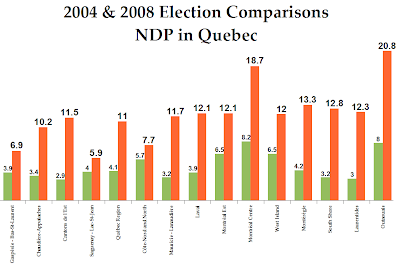 The NDP took off in two places, in Montreal Centre and in the Outaouais, with 18.7% and 20.8%, respectively. This should come as no surprise, as Outremont is in the former region and Gatineau in the latter. Those are the two ridings the NDP has the most chance of winning in the next election.

I had originally thought that this investigation would reveal that much of the support has come from the Bloc. In a time where the National Question is on the backburner, it makes sense that many social democratic Quebecers would move over to the NDP to give another party a try. The truth of the matter, however, is that voting preference shifts have been relatively uniform throughout the province. The Liberals seem to have lost about 10 points and the Conservatives about the same amount, while NDP growth and Bloc losses are also in similar proportions. So what does that tell us? Perhaps Liberal voters are going over to the Conservatives and Bloc voters are going to the NDP. Or, more likely, it is much more complicated than that and all we can say is that the NDP and the Tories have benefited from the reduction in support for the Liberals and the Bloc.

If we compare the 2008 election to the last time the NDP has done well in Quebec, in 1988, we see that some ridings have always had good NDP support while others have either fallen out of the NDP fold or fallen into it.

During Jack Layton's tenure, the same few ridings have always been the best performers for the NDP. They are located primarily in the Outaouais and the centre and eastern portions of Montreal. The top riding for the last three elections has been Outremont, with 14% in 2004, 17% in 2006, and 40% in 2008. That is a good base for Thomas Mulcair.

Two other Montreal ridings, Westmount-Ville-Marie and Laurier-Sainte-Marie, have also been good spots for the NDP. Support has gone from 12% to 15% to 23% in the first riding, while it has gone from 12% to 17% to 17% (again) in the latter riding. However, as LSM is Gilles Duceppe's riding, it is unlikely the NDP can take advantage of their strength.

Interestingly, it seems that over the last 20 years NDP support has shifted. While it is now on the island of Montreal (primarily in the centre and east) and in the Outaouais, back in 1988 the areas of strength were in the north, in Montérégie, in Mauricie, around Quebec City, and, implausibly, in the Saguenay.

Clearly the areas of greatest strength for the NDP back in 1988 are no longer areas of strength. But some things have not changed. The NDP had 22% support in Laurier-Sainte-Marie in 1988 and 20% support in Outremont. Hull-Aylmer was at 15% while Gatineau was also at 15%. Westmount-Ville-Marie was at 13%. So, the top ridings for the NDP today have not come out of the blue.

But while the party was getting 20% in today's Québec and Lévis-Bellechasse ridings in 1988, that support has halved twenty years later. The support they had in northern Quebec is gone, as it also is in the Mauricie region.

While the party has drifted away from some of its rural Quebec roots, it is still solidly founded in Montreal and the Outaouais. It bodes well for the NDP's future in Quebec.

Many thanks to the Pundits' Guide for the compilation of most of this data and its ease of access.

Note: I am going to be taking a break from blogging for about a week, so don't expect any posts for the next few days.
Posted by Éric at 10:43:00 AM