Time for June's "Best Case Scenarios". Not a huge change from May's best case scenarios, though the Conservatives are now on the brink of a majority. How do I come to these numbers?

What I've done is taken each party's best projection result in each region (West, Ontario, Quebec, Atlantic Canada), and taken these best results to get a national, best case projection based on polls from last month.

In other words, these projections are the best possible result each party could've gotten had an election taken place in the month of June.

The New Democrats have been hovering around the 40-50 level since I've started doing these in March. That month, their best case scenario was 43 seats. That increased to 50 in April, went down to 41 in May, and is now at 44. 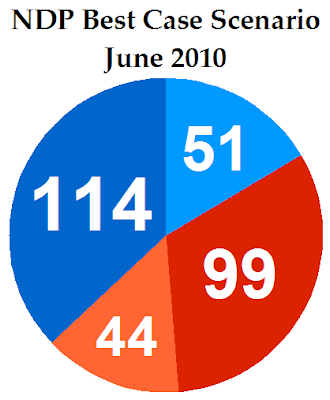 They get 44 seats with 18.7% of the Canadian vote. This puts them only seven seats behind the Bloc Québécois for third party status, and with the Liberals gives them 143 seats, while the Conservatives are held to 114 seats.

Their best vote haul comes in British Columbia, with 30%. Next is Atlantic Canada, with 26%, the Prairies and Ontario with 18%, Quebec with 15%, and Alberta with 13%. Their biggest regional bloc is in the West, where they have 20 MPs. 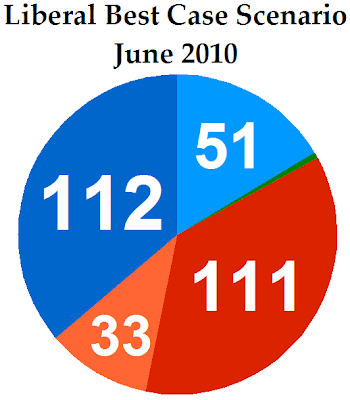 The Liberals take 30.4% of the vote, but cannot form government on their own. Even working with the NDP is not a slam-dunk, as the two parties would have 144 seats (145 if they included the Greens). Obviously, a Conservative government would be nearly unworkable, but it would be difficult to call this result a real success for the Liberals.

Perhaps indicating that polling has not changed much over the last four months, the Conservatives, too, have been varying only within 10 seats in their best vcase scenarios. Their best result was in April, when they took 159 seats and their only majority result. They had 148 in March and May, and have now moved back into near-majority territory with 154 seats. So, a split right down the middle of the House of Commons. 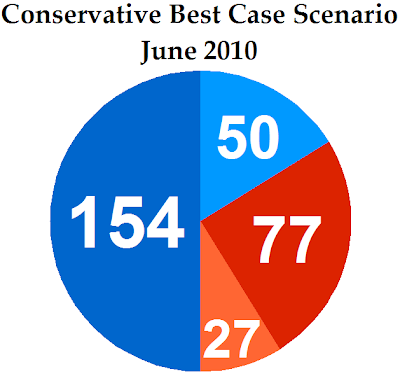 These 154 seats come with 39.3% of the vote, which would be their best result ever. This would be as good as a majority for them, though it would require some careful management of numbers in Parliament. Most of these seats come from the NDP, who are reduced by 10 MPs.

This shows how problematic it is for the Conservatives to ignore Quebec, as some have suggested. Even if all goes well for them, they are still looking at a minority.
Posted by Éric at 11:48:00 AM