The Success of the ABC Campaign in Newfoundland & Labrador

Premier Danny Williams is a popular guy in Newfoundland & Labrador. But his popularity transcends mere provincial politics, and he proved that during the last federal election.

Williams considered Prime Minister Stephen Harper to have broken his promises concerning equalization payments for Newfoundland & Labrador. As a result, he urged Newfoundlanders and Canadians to vote "Anything but Conservative", or ABC. This call had a limited appeal in the rest of Canada, but was certainly heard on the island. To aid matters, Williams made sure his Progressive Conservative Party did not work with their federal counterparts, crippling Harper's organization in Newfoundland & Labrador.

Because of Williams' ABC campaign, Newfoundland & Labrador bucked the trend that took place virtually everywhere else in the province, reducing the government's support significantly while, nationwide, the Conservatives took a larger share of the vote.

To get a real picture of the debacle, the best way to look at it is at the riding level.

In Humber - St. Barbe - Baie Verte, turnout dropped by 6,250 voters, from 54.8% to 44.3%. But here again it was not just about Conservatives staying home. Gerry Byrne of the Liberals held on to his seat and picked up an extra 748 votes, while Mark Kennedy of the NDP lost 244 for his party. But Lorne Robinson had 7,338 votes fewer than his predecessor Conservative candidate in 2006.

The biggest drop in turnout, in real numbers, came in Bonavista - Gander - Grand Falls - Windsor, with 9,632 fewer voters. Nevertheless, Scott Simms of the Liberals increased his vote by 223, while the NDP picked up another 889 votes. Andrew House lost 11,022 votes for the Conservative Party.

The Conservatives lost another seat in St. John's South - Mount Pearl, where Merv Wiseman hoped to hold on to former cabinet minister Loyola Hearn's seat. While 2,840 fewer people voted here than in 2006, the Conservatives lost 12,320 votes - almost 10,000 more than might have been lost to the lower turnout. The Liberals benefited, electing Siobhan Coady (with a gain of 2,625 votes). The NDP also made a big gain of 5,898 votes.

Finally, in St. John's East, turnout actually INCREASED. An extra 402 voters went to the polls in this steadily growing riding. Conservative MP Norman Doyle was not running for re-election, and so Craig Westcott took his spot and lost fully 15,274 votes. This was also a bad riding for the Liberals, as they lost 9,134 votes. Jack Harris, former leader of the NL NDP and former NDP MP, came roaring back with a gain of 23,691 votes for his party. 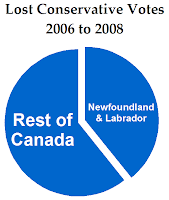 In total, the Conservatives lost 64,898 real votes in Newfoundland & Labrador. To put that into perspective, the Conservatives lost 165,275 votes between 2006 and 2008 in the entire country. In other words, the ABC Campaign accounted for 39% of the Tories' losses in the 2008 election. Not bad for a province with less than 2% of Canada's population.

Both the Liberals and the New Democrats made gains at the expense of the Conservatives in this election. The Liberals bumped their popular support up to 46.8% from 42.8% in 2006. It was their fourth best result in the last nine elections, this despite having a historic low nationally.

The NDP increased their support from 13.6% to 33.7%. That was new ground for their party, as their previous best result recently was in 1997 when the party had 22% support.

There is some chance that the NDP can use 2008's success as a springboard to a seat gain. But that opportunity lies only in one riding: St. John's South - Mount Pearl. Winning two seats in Newfoundland & Labrador, after having never won a seat in a general election in the province prior to 2008, would be a big moral victory.

Regionally speaking, the Conservatives dropped everywhere in the province, while the Liberals made gains on the mainland of the island. The NDP's bump came on the Avalon Peninsula. 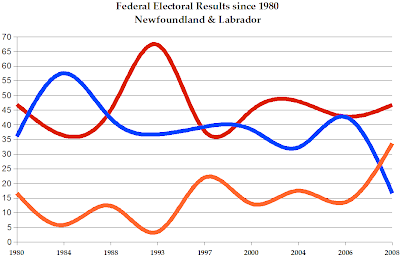 To put the Conservatives' Newfoundland catastrophe into perspective, consider that the party's previous low (using Progressive Conservatives results prior to 1993 and PC + Reform/Canadian Alliance after 1993) since 1980 had been 32.3% in 2004. From 42.7% in 2006, the Conservatives dropped to a mere 16.6%. This after earning anywhere from 32% to 58% in the province over the last thirty years.

But it's only seven seats, you say, and they've never won more than four of them in the last 30 years.

As the latest polls in Newfoundland & Labrador have shown, Danny Williams is as popular as ever. He may not run his ABC campaign again in the next election, but the rift between the provincial Progressive Conservatives and the federal Conservatives will not be an easy one to mend. The federal organization was ripped apart and humiliated in 2008. The party lost thousands of voters to the other parties and more to voter apathy. Can those bridges be re-built and those voters brought back into the fold?

Or will the Liberals and NDP sweep the province again?
Posted by Éric at 8:26:00 AM