Ipsos-Reid has a new poll out, showing that the gap between the Liberals and the Conservatives is far narrower than this past week of EKOS polling. 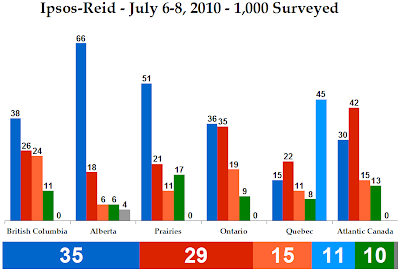 Compared to Ipsos-Reid's last poll at the beginning of June, the Conservatives are unchanged at 35%. The Liberals, however, are up two points and are at 29%.

Odd that Liberal supporters will find solace in an Ipsos-Reid poll.

In Ontario, Ipsos-Reid confirms that the G20 Summit hasn't hurt the Tories. They are up three points to 36%, while the Liberals are down three to 35%. The NDP is doing well, up one to 19%.

In Quebec, the Bloc is well ahead with 45%, unchanged from the June poll. The Liberals are up one to 22% and the Conservatives are up three to 15%. The NDP is steady at 11%.

In British Columbia, the Tories are down eight but still lead with 38% (Ipsos's June result was a little high). The Liberals are up nine to 26% and the New Democrats are up four to 24%. The Greens are at 11%.

The Liberals lead in Atlantic Canada with 42%, up 15 points from June. The Conservatives are down 14 points there. This big change is due to the small sample size and unlikely numbers from the last poll.

The Conservatives lead in Alberta with 66%, up six, while the NDP is down nine to 6%. The Tories are also in front in the Prairies, with 51%. The NDP is down six here to 11%, behind the Greens. 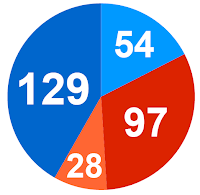 Not a bad poll for the two major parties, as the Conservatives want to be at 35% or over. The Liberals can also be a little happy with this poll, as 29% is at the higher end of their recent scale.

This is a great poll for the Bloc, but a bad one for the NDP. Their only positive result is in Ontario - 19% there would be a big victory for them.
Posted by Éric at 11:06:00 AM