BC NDP leads by 23 points

A new British Columbia poll by Angus-Reid gives the New Democrats a huge lead over Premier Gordon Campbell's BC Liberals. 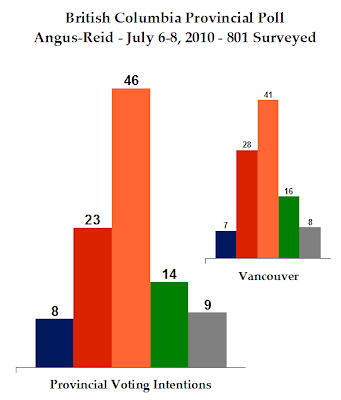 The BC NDP under Carole James are at 46%, unchanged from Angus-Reid's last poll at the beginning of June. But the BC Liberals have lost three points and are down to a meager 23%.

The BC Greens are stable at 14%, as are the BC Conservatives at 8%.

The NDP is doing best on Vancouver Island, where they lead with 67% (up 13 points). The Greens are in second there, with 12% (down four), followed by the BC Liberals at 9% (down nine).

The HST is the huge problem, as most British Columbians are opposed to it and would even sign petitions to recall their Liberal MLAs. People in Ontario are a little more level headed. It's just a few points on a few things, and British Columbians still pay less than we do here in Ontario. Meanwhile, all of our provincial governments are aching for funds. 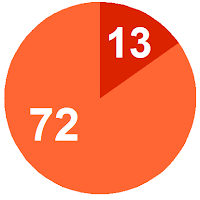 Anywho, I put together a projection model for British Columbia. It is a little difficult, as the parties have changed a lot over the years and the seats have gone from 75 to 79 and then to 85 in the last election. There are also a lot of extremes, with the NDP being reduced from government to two seats back when Gordon Campbell first came in.

Nevertheless, with this poll I project 72 seats for the New Democrats and 13 for the BC Liberals.

One wonders if Carole James will beat Pauline Marois to be the first elected female premier of a major Canadian province. As elections in both provinces aren't supposed to happen before 2013, the race is on!
Posted by Éric at 10:49:00 AM