EKOS is up with its bi-weekly poll. But they make us wait for two weeks for nothing much. However, the Conservatives are showing a lack of life, possibly due to the ridiculous situation with the census. We'll have to see how things progress in the next few weeks. But first... 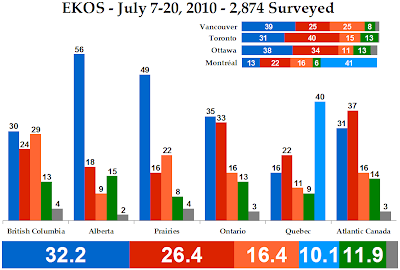 Compared to EKOS's last two-week poll earlier this month, the Conservatives are virtually unchanged. They've gained 0.1 points to reach 32.2%. The Liberals are up 0.6 points to 26.4%, while the New Democrats are down 1.1 points to 16.4%. 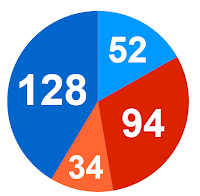 The Conservatives win 65 seats in the West and North, 48 seats in Ontario, 6 in Quebec, and 9 in Atlantic Canada for a total of 128.

Things are pretty much stuck. Overall the Liberals did see a gain but their lower number was in the most recent week. It will be interesting to see what happens over the next two weeks as the Liberal Express bus tour continues and the census issue becomes more embarrassing for the Conservatives.
Posted by Éric at 9:58:00 AM