Gap closes between NDP and PC in Manitoba

Probe Research released a poll on the provincial situation in Manitoba. While there hasn't been a lot of movement since their last poll in March, the race is getting heated. Nevertheless, ThreeHundredEight's new projection model shows a majority government. 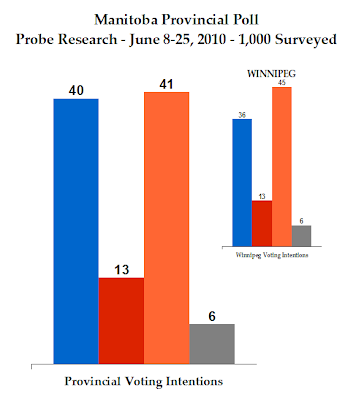 Premier Greg Selinger's New Democrats stand at 41%, down one point from March. The Progressive Conservatives under leader Hugh McFayden are at 40%, up one from March. The gap has closed to a statistically insignificant margin.

The Liberals, under Jon Gerrard, are at 13%, up two points. The other parties, the Greens foremost among them, stand at 6% (down two).

The NDP nevertheless holds the lead in Winnipeg with 45%, compared to 36% for the Progressive Conservatives and 13% for the Liberals. But it is the PCs who lead in the rest of Manitoba, with 46% to the NDP's 34%. The Liberals, here, are also at 13%.

The NDP leads in most sectors of the provincial capital, though the Progressive Conservatives are ahead in northwest Winnipeg. 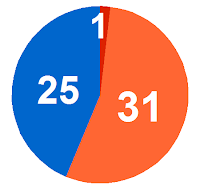 I've put together a projection model for Manitoba, and with this poll the New Democrats would be returned to government with 31 seats.

The Progressive Conservatives would win 25, while the Liberals would elect only one MLA.

Probe Research also looked into which issues were most important for NDP and PC supporters. The results read like a stereotype of right vs. left.

That probably indicates what the next election, to be held in 2011, will be about. It looks like it will be tough for Selinger to win his first general election, though he does currently hold the advantage.
Posted by Éric at 9:21:00 AM