Time to look at June's polling. Seven national polls were taken during this month (three fewer than last month), totaling about 12,661 interviews. Here are the results we get at the national level, with the difference from last month's average in brackets.

After gaining 1.6 points in May, the Conservatives have dropped 1.9 points, back below 33%. But the Liberals also take a step backwards, though they did have a small gain last month. The NDP gains a full point, but they had lost 0.7 points last month so this is a bit of a reset. The Green gain is equal to May's losses.

The Conservatives fall back down six seats, matching ThreeHundredEight.com's current projection. The Liberals are steady at 91 seats, while the Bloc is up two. The NDP makes the biggest gain, and now have 35 seats. 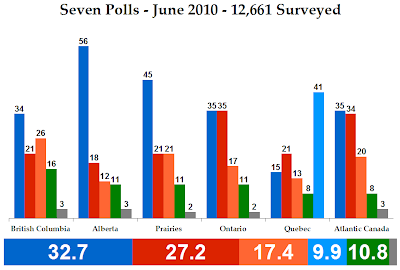 The Tories are down big in the province, but it certainly wasn't to the benefit of the Liberals, who are also down significantly. Instead, the NDP gained half-a-point while the Greens gained 3.5 points. They are now nipping at the Liberals' heels.

The Conservatives are stable, while the Liberals have lost a bit. However, they still doing relatively well in the province. The NDP and Greens swap positions, as the NDP makes a larger gain.

The Conservatives drop, but drop less than they gained in May, so they are in a decent position. The Liberals are down, marking losses of over two points in the last two months. The NDP is also down, but are now much closer to second place in Saskatchewan and Manitoba. The Green gain is generally a reset of May's losses.

The Conservatives take 66 in the West (one fewer than in May), while the Liberals win 14 in the West and North (also down one) and the NDP wins 15 (up two).

The Conservatives drop two points, obliterating their good 2.1-point gain from May. The Liberals don't benefit, however, dropping 0.1 points. But they have been pretty stable, as this is only a loss of 0.3 points over the last two months. The NDP makes an important gain.

The Bloc is up almost two points, putting them at over 40%, the first time they've been at such a level since February 2009. The Liberals lose over a point, and are falling away. The Conservatives have dropped big, and are now in "trouble" territory. The NDP are stable, but at a very good level for them.

The Bloc takes 54 seats (up two, tying a historic best), the Liberals take 14 (unchanged), the Conservatives take 5 (down two) and the NDP win 2 (unchanged).

The Conservatives are up again, almost six points in all over the last three months. They've taken the lead over the Liberals, who are down 2.5 points after gaining one point in May. The NDP is down, yet again. They've really been disappearing in Atlantic Canada. The Greens have re-gained their May losses. 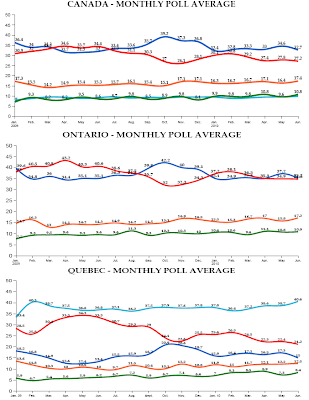 Of the five parties, the Liberals performed the worst in June. Their net loss in the six regions was 7.6 points, but more important they did not make a gain anywhere. Big losses in Atlantic Canada, Quebec, the Prairies, and British Columbia hurts. The only silver lining is that their loss in Ontario was marginal.

The Conservatives also had a very bad month. Their net loss was 7.7 points, but they did gain in Atlantic Canada. Their losses in Quebec, Ontario, and British Columbia - Canada's three battleground provinces - should be very worrisome for them.

We then transition into the winners, with the NDP having a net gain of 0.8 points. They were up in four regions and down in two. Their gain in Ontario was a good size and is good news, but the party should be concerned with their performance in Atlantic Canada.

Then it is the Bloc, who had a gain of 1.9 points in Quebec. They are in a very, very good position in the province. While 40.6% is good considering their electoral performance in 2008, their real strength is found in the weakness of their opponents.

Finally, the Greens have to be considered to have had the best month. Their net gain was 9.9 points, with significant increases in support in Atlantic Canada, the Prairies, and, most importantly, British Columbia. But they still aren't in a position to elect a single MP.
Posted by Éric at 2:51:00 PM