Environics has a new poll out, showing a much closer race between the Conservatives and the Liberals than other pollsters are showing. 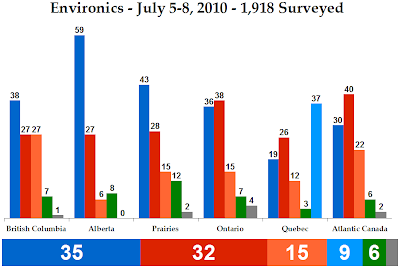 Comapred to Environics' last poll at the end of May, the Conservatives have dropped one point and are now at 35%. The Liberals are up two and are at 32%.

The New Democrats are steady at 15%, followed by the Bloc Québécois at 9% (down one) and the Greens at 6% (down one).

Note that Environics does not prompt party names in their telephone polling.

The Liberals lead in Ontario with 38%, up three points. The Conservatives are down four to 36%, while the NDP is up one to 15%.

In Quebec, the Bloc is down four points to 37%. The Liberals are up two to 26% while the Conservatives and NDP are steady at 19% and 12%, respectively.

The Conservatives drop one in British Columbia but lead with 38%. The Liberals (up two) and NDP (up three) are tied at 27%, while the Greens are down four to 7%. 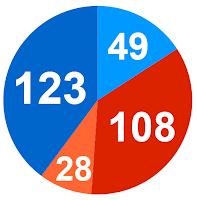 It is always interesting to see polls that are out of step with others, but then it makes it difficult to figure out what is exactly going on. That Environics doesn't prompt is a factor, and the 31% undecided number also plays a role. But there is nothing in this poll that is spectacularly wrong. Perhaps the only big difference is that Environics has the Liberals doing well in Ontario.

In any case, polls like this show that things aren't all death and darkness for the Liberals.
Posted by Éric at 10:15:00 AM