There was a provincial by-election in Quebec last night. It took place in the riding of Vachon, an electoral district in the Montérégie region, centred around St-Hubert (Longueuil).

To give you a little background on Vachon, it was created in 1980 and has elected the Parti Québécois seven out of nine times (the Liberals won two elections in the 1980s). The riding voted 56.8% in favour of the OUI in 1995, and has been represented by the PQ since 1994.

So, the by-election (caused by the resignation of Camil Bouchard, who had represented the riding since 2003) wasn't expected to be won by anyone but the PQ. But the by-election is the first electoral test that the PLQ government of Jean Charest has had to under-go since it's support has plummeted.

The turnout was 29.3%, not a bad result considering it is the middle of the summer, just after the Canada Day long weekend.

The two main contenders for the election were Martine Ouellet (PQ), a former engineer for Hydro-Quebec, and Simon-Pierre Diamond (PLQ). Diamond, at the age of 22, was the youngest MNA in Quebec history when he was elected under the ADQ's banner in 2007. He's now 25, and as Ouellet is (I believe, a quick search hasn't helped) under 40, this was a race that would inject some young blood into the National Assembly.

The result was a resounding win for the Parti Québécois and Martine Ouellet, who increased her party's vote by 10.6 points (22%). 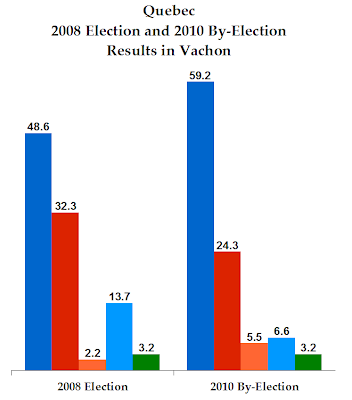 With 59.2%, this is the biggest win any candidate has had in Vachon since its creation. The PLQ has to be disappointed with its 24.3% result, a drop of eight points or about 25%. They are back down to the result they had in 2007, when they finished third in the riding.

It was not a good by-election for the ADQ, which has tended to perform badly in by-elections since their 2007 surprise. Alain Dépatie, the ADQ's candidate, earned only 6.6%, a drop of 7.1 points from the 2008 election. However, this is not one of their traditional strongholds, so it isn't surprising to see them at such a low level. And it's likely that some ADQ supporters voted for Diamond, an ex-ADQ "star".

It was a decent by-election for Québec Solidaire, however, who went from 2.2% in 2008 to 5.5% in 2010. This indicates their higher support levels we've been seeing in polls is not an illusion.

The PVQ (Greens) did not increase its support, maintaining the 3.2% they earned in the 2008 election. But, even that is down from 2007 when the party had 4% support. This, perhaps, indicates that their higher support level in polls is an illusion.

Arguably, we can use this uniform-swing model to say that the Vachon by-election confirms the province-wide polls we've been seeing. More specifically, it shows that the PQ's increased support is real, that the PLQ is in trouble, that the ADQ is going nowhere (fast), and that QS is actually becoming a bit more competitive.

(Note: Blogger seems to be having issues with comments at the moment, so if your comment doesn't show up it might have been lost. I am getting them in my inbox, but I can't get them posted to the site. Hopefully the problem will be resolved soon enough. In the meantime, why not comment on Twitter?)
Posted by Éric at 9:00:00 AM