In anticipation of Canada Day, Angus-Reid released a poll about how Canadians view certain "Canadian" symbols, and how they see their own province within the Canadian fold.

Rather than spend some time pontificating on how Canadians are proud of hockey, I thought it would be more interesting to look at something that immediately struck me when perusing the poll results, that being the difference between how Quebecers and other Canadians see the country they both find themselves in.

For starters, Angus-Reid asked whether certain Canadian symbols made respondents feel proud or not (with varying levels of pride being options). Some of them aren't really "Canadian" per se (like the justice system, our health care system, or economy) but rather more about how we govern ourselves. Few people consider, for example, Parliament to be a uniquely Canadian symbol.

So, instead I've focused on four symbols which are both "Canadian" and showed a striking difference of opinion.

(For the purposes of this article, I will refer to those who live in the "Rest of Canada" as Canadians - rather than ROCers or something longer.)

The Canadian flag, a Canadian symbol if ever there was one, makes 95% of Canadians feel proud, but only 69% of Quebecers. This is a pretty consensus opinion in the ROC, as the spread is only from 93% (Atlantic Canada) to 98% (the Prairies - which appear to be the most proudly Canadian part of the country, according to this poll).

(On the following chart, blue is used for Quebec and red for the rest of Canada.) 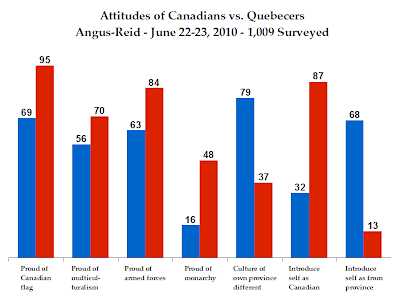 How about the Canadian Armed Forces? With only a difference of opinion in British Columbia, 84% of Canadians are proud of them, compared to 63% of Quebecers.

But how about how Canadians see their own province, as compared to others? To the question of whether their province had a culture different from the rest of the country, only 37% of Canadians said it did, compared to 79% of Quebecers. Not surprisingly, Atlantic Canada (and probably virtually everyone in Newfoundland) was the region with the most people saying that it did. But nevertheless, that is a huge difference.

And as to the question of how you would introduce yourself to a person you hadn't met before, 87% of Canadians said they would call themselves "Canadian" (including 95% of those in the Prairies and 97% of those in Ontario), while only 32% of Quebecers would do the same.

This is just a little reminder that, despite all the flags and red-and-white that will be plastering the country today, things still aren't close to perfect between Canada's various regions, as well as between its two solitudes.
Posted by Éric at 10:34:00 AM