Angus-Reid released a new poll yesterday. While it shows a bigger gap than most of the polls we've seen lately, it also shows very little movement from Angus-Reid's last poll at the end of May. 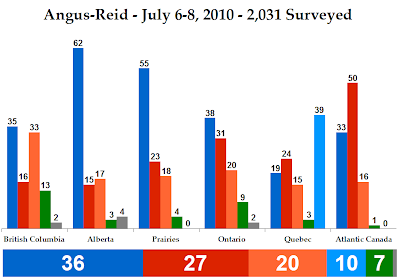 At 36%, the Conservatives are up one point over that last poll. The Liberals are steady at 27% and the New Democrats are up one to 20%.

The Bloc Québécois is up one to 10% and the Greens are down one to 7%.

This is a very good poll for the NDP. They're up four points to 33% in British Columbia, only two points behind the Conservatives at 35% (down eight). The Liberals are steady at 16% while the Greens are up two to 13%.

In Ontario, the Conservatives take three points from the Liberals and lead with 38%. The Liberals are lagging behind with 31%. The NDP is steady at 20%.

The Liberals are up 10 points in Atlantic Canada and lead with 50%. The NDP is down six points there to 16%. The Conservatives lead in Alberta with 62% and the Prairies with 55% (up seven). 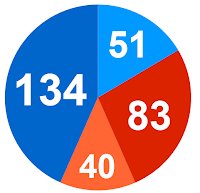 The poll also looked at some personal opinions people had of the leaders. The most important result was the approval/disapproval rating. Jack Layton's is the best, with a split of 31% to 32%. Stephen Harper's spread is 31% to 48%, and Michael Ignatieff's is a woeful 14% to 53%.

This poll confirms a few other things we've been seeing lately, namely that the G20 did not hurt the Conservatives and that they've moved ahead in Ontario. It also serves to confirm Bloc strength in Quebec.

These results are very similar to the 2008 election. If things continue like this through the summer, I don't see how we would have an election in the fall. It would be a waste of time and money for all involved.
Posted by Éric at 8:15:00 AM