Did anyone else go through poll withdrawal? Well, thank the good Graves because EKOS is here to give us a sweet, sweet hit. And it has a few surprises. 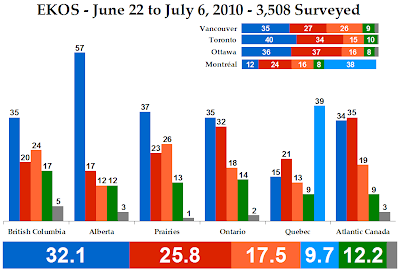 This poll was taken over two weeks, rather than over one week as is usually the case. However, EKOS is providing the details of the weekly results, along with the full two-week results. As those latter results are given in more detail, those are the ones I will be using for the projection.

That Liberal result is below their 2008 electoral result.

But this poll is far more interesting when we look at the weekly results. In the first week of polling, right in the middle of the G20 summit, the Conservatives were down to 30.6%, compared to 26.2% for the Liberals. But in the second week of polling, the Conservatives jumped to 34.4% and the Liberals sank to a woeful 23.9%. This is a bit of a surprise, as I frankly expected the Liberals to close the gap in the wake of the summit.

The Liberals barely lead in Atlantic Canada with 35.2%, despite the wonky second-result giving the NDP 42%! The Conservatives lead in Alberta with 57% and also in the Prairies. They are at 37.4% there, but that is down eight points. The NDP picked up those points, and is at 25.5%.

Looking at the demographic breakdown, we see that the Conservatives lead among males, with a ten-point spread between them and the Liberals. But the spread is reduced to two points among females. 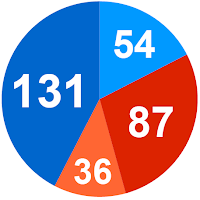 But what if we take last week's polling results, where the Liberals were at only 23.9%?

In that case, the Conservatives (who are still down from 2008) win 143 seats, compared to 73 for the Liberals, 53 for the Bloc, and 39 for the NDP. The fact of the matter is that the spread between the Tories and Liberals in that poll is almost identical to the spread in the 2008 election. Simply put, you aren't winning a majority with 34%.

But that the Liberals polled so low in the more recent poll makes EKOS's next poll, which we can expect on the 22nd, will be eagerly awaited. Will the Liberals stay below 24% over the next two weeks?
Posted by Éric at 9:04:00 AM