Since the days of the French Revolution, politics has been a conflict between left and right. While that might be a bit of a generalization, it is nevertheless true that over the years of our Canadian democracy politics has usually been divided into two general world views, one that is called the left and one that is called the right. These can be most easily summed up by the names of the two main Canadian parties: liberal for the left and conservative for the right.

Obviously, since 1867 the parties have changed and re-branded themselves. But, nevertheless, I thought it would be interesting to look at the voting behaviour of Canadians since 1867 as regards to those two poles of the political spectrum.

What we get is a picture of how left or right Canada has been since it's inception (which, by the way, is an awesome movie I saw last night).

Looking at the chart below, we see that Canada has, for the most part, voted left-wing with brief interludes to the right. 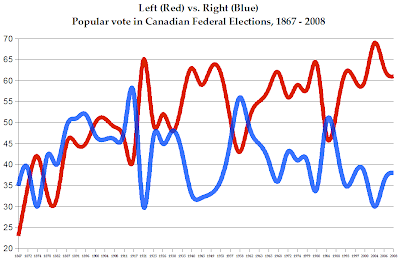 But things turned to the left's advantage in the 1920s and 1930s, with increased awareness about labour issues and the impact of the Great Depression. Mackenzie King's Liberals dominated during the 1930s and 1940s, with the left (now included the CCF) topping 60% until 1957.

From then until 1962 it was the right that held the advantage, but from that point until 1984 the left was in clear control, garnering anywhere from 55% to 65% support. Brian Mulroney's Progressive Conservatives changed things in 1984, but since then the right has been in steady decline as more varied options appear on the left. Left-wing parties have earned more than 52% support since 1988, and have not been below 60% since 1993. Their vote, however, is declining a little, from a high of 69% in 2004 to 61% in 2008. The Conservatives, now alone on the right, have not had more than 38% support since 1988.

If we wanted to average things out in terms of epoch, it breaks down as follows:

Food for thought. Obviously, in our system of first-past-the-post and multiple parties, this is really only academic. The right has formed government for a greater period of time than they have led public opinion. And, of course, the Liberals are more of a centrist party than a left-wing party. But, if Canadians are divided into two poles, it is interesting to see how they fall.
Posted by Éric at 10:56:00 AM