Ontario Liberals up in GTA, close gap with PCs

On Thursday, The National Post reported on a new Ipsos-Reid poll on the provincial political situation in Ontario. The results show that the Liberals have made some gains at the expense of both the Progressive Conservatives and the New Democrats, but that they would still lose the election to Tim Hudak. 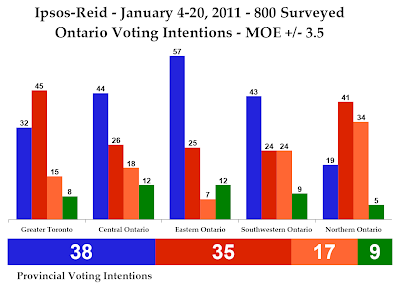 The last Ontario poll from Ipsos-Reid dates from mid-November. Indeed, that is the last Ontario poll from any firm. It's amazing to me that a province as large as Ontario, and with an election less than a year away, is not polled more often. Léger Marketing and CROP poll the voting intentions of Quebecers on a monthly basis, and the next election there won't be until 2013.

In any case, compared to that last Ipsos-Reid poll, the Progressive Conservatives have lost three points, but still lead with 38%. The governing Liberals are up three points to 35%, closing the gap to just inside of the 3.5 margin of error for this telephone poll.

Andrea Horwath's New Democrats are down three points to 17%, while the Greens are up two to 9%.

The Liberals are leading among voters aged 18-34, among women, university grads, and people with incomes of $30,000 or less. The PCs, on the other hand, lead among those aged over 35, those with a high school or college education, those who make more than $30,000, and among men.

The source of the Liberal gain is the Greater Toronto Area, as Dalton McGuinty's party has increased its support by 12 points. They now lead with 45%, followed by the Progressive Conservatives at 32%, down eight points. The NDP is down five points to 15%.

Another region of Liberal gain was in southwestern Ontario. The PCs are still well ahead here, however, though they are down five points to 43%. The Liberals are up three points to 24%, tied with the NDP (who are unchanged).

Where Hudak's party is not doing well is in the north, where they have dropped four points to 19%. The Liberals lead here at 41%, unchanged from November, while the NDP is up five points to 34%. 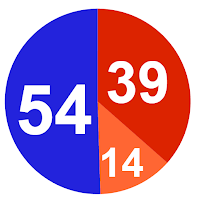 This would give Hudak the slimmest of majorities. In fact, putting a PC MLA in the Speaker's chair would split the Legislative Assembly down the middle. How this would play out is unknowable, but if McGuinty resigned as leader of the party after the defeat it is likely that Hudak would be able to govern without trouble. If the race continues to be this close throughout the year, it should be an interesting campaign.
Posted by Éric at 2:28:00 PM