When Forum Research last reported on the federal voting intentions of Quebecers, it made some waves by placing the New Democrats second behind the Liberals. Those waves continue to roll, as their latest survey of 1,589 Quebecers puts the NDP third behind the Bloc Québécois and the Liberals. 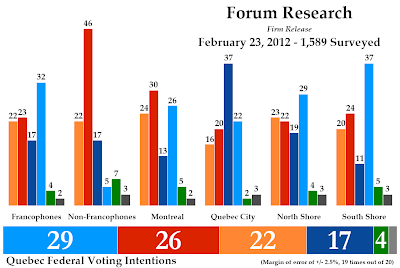 Forum was last in the field on February 6, and since then the New Democrats have slipped three more points to 22% support in the province, 21 points behind their May 2011 performance.

The Bloc Québécois has picked up nine points and stands at 29%, followed closely by the Liberals, down two points since early February.

The Conservatives are down seven points to 17%, while the Greens stand at 4%.

It might come as little surprise that a poll that found the Parti Québécois leading by nine points would also show decent results for the Bloc. Perhaps intentions are shifting back to the two sovereigntist parties in the province, or perhaps the poll's focus on provincial issues influenced respondents. However, the same has not appeared to happen in polls from CROP and Léger that survey the federal and provincial voting intentions of Quebecers at the same time.

Most significantly, the Bloc has moved ahead in the francophone electorate with 32% support, well ahead of the Liberals (23%) and the NDP (22%). Among non-francophones, the Liberals are dominant with 46% support to 22% for the NDP and 17% for the Conservatives.

The Bloc leads outside of Montreal and Quebec with roughly 33% support, compared to 23% for the Liberals and 22% for the NDP.

The Liberals are ahead in Montreal with 30% support to 26% for the Bloc and 24% for the NDP, while the Conservatives lead in Quebec City with 37%. The Bloc trails with 22% while the Liberals are third with 20%.

The significance of this poll is reduced by the fact that the NDP has not chosen its next leader - but it does give an indication of how low the party can dip if the choice does not jive with Quebecers. This same poll shows that Quebecers want Thomas Mulcair to lead the party. No other leader comes close to his numbers. 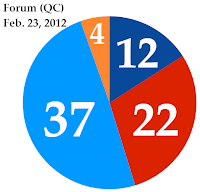 With these levels of support, the New Democrats would be reduced to only four seats from their current haul of 58. The Bloc Québécois would fall just short of a majority with 37 seats, while the Liberals would win 22 and the Conservatives 12.

In other words, an unmitigated disaster for the NDP. Assuming nothing else would change outside of Quebec, this would reduce the NDP's representation in the House to only 47 seats, placing them third behind the Liberals, who would have 49 seats. There are, however, enough close races to make it possible for the NDP to retain its position as the Official Opposition, but this is a very simple demonstration of just how important their Quebec support is if the NDP is to keep that role.

Forum has been a bit of an outlier of late in Quebec, however, so we need some other results before we can confidently say that the NDP has slipped this much in the province. The most recent CROP poll would seem to suggest they haven't.

A poll from Lethbridge College on the federal voting intentions of residents in Lethbridge and Coaldale is also worth noting. The poll, conducted February 11-12 and surveying 738 people for an MOE of +/- 3.6%, found that the Conservatives are still comfortably ahead in the two cities with 53.1% support, down a mere 3.3 points since Lethbridge's last poll in 2011. (Note: Coaldale is located within the federal riding of Lethbridge, but parts of the riding, which stretches down to the American border, were not included in this survey.)

What's interesting, however, is how the New Democrats have moved into second in the area, as they have done in the province as a whole. The poll puts the NDP at 23% support in the region, up 12.6 points since a year ago. The Liberals have slipped 2.6 points to 17.9%.

Of course, this only changes the party the Conservatives hold a 30-point lead over. But this survey helps confirm the trend in Alberta that the New Democrats have become the alternative to the Tories in the province. They still have a long way to go, but an extra NDP seat or two in Alberta, particularly in Edmonton, is not impossible in 2015.
Posted by Éric at 11:12:00 AM