I've updated the Quebec provincial projection. Jean Charest's Liberals are back into majority territory. Of course, he is already there and will remain so until 2012 or 2013. But I like to keep it up to date nevertheless.

Here's how the polling has looked in Quebec this year: 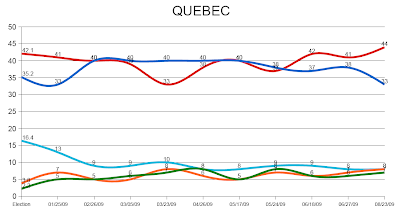 Quebec provincial politics do not translate directly to the federal scene. But there are two guideposts one can use to help out with reading the trends in that province. The Bloc Quebecois tends to do better than the Parti Quebecois, so the support level of the PQ can be considered the 'floor' of the Bloc. The other guide is that an ADQ supporter is almost certainly a Conservative supporter, so the support level of the ADQ can be considered the Conservative 'floor' in Quebec or its 'ceiling', if the ADQ is doing better than the Conservatives. With the current troubles the ADQ is having, however, that might not be very useful anymore. The ADQ is slipping into obscurity.
Posted by Éric at 9:45:00 AM