Angus-Reid released a new poll today, focused on how Canadians feel about the four pan-Canadian parties. Respondents were given 17 words, and had to say whether they felt each word applied or didn't apply to each party. The poll was taken between August 11 and August 12 and involved 1,003 respondents.

First, here are some graphics of the top five and bottom three responses for each party, with the word size denoting the relative size of people who said these words applied to each party.

The main thing you can take from this is that people generally don't have good opinions about any of the parties.

Now, let's look at how they are perceived overall. What I've done is averaged out all the totals for the positive and negative qualities, to give a result of how many people have a negative or positive view of the parties. 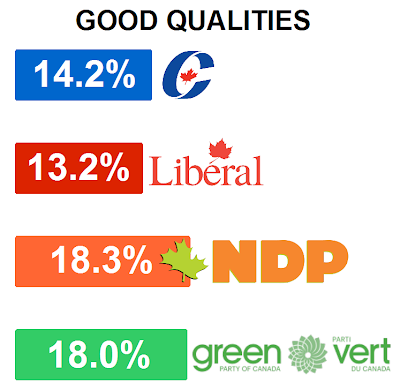 So the NDP and the Greens have the best scores, and are seen most positively by Canadians. The Conservatives and Liberals follow, with the Liberals in last - quite surprising, actually. What's interesting is that Angus-Reid also broke down the results by how people voted in 2008. Looking at it that way, Green voters are most enthusiastic about their party by giving them an overall positive score of 47.3%. This is followed by the NDP (40.4%), the Conservatives (32.3%), and Liberals (31.7%). 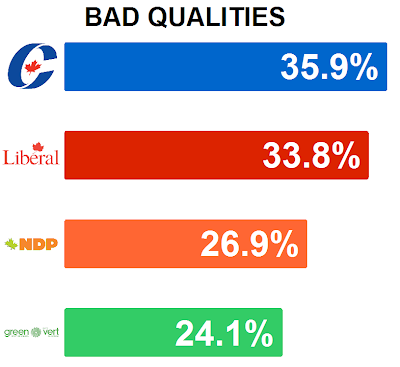 So how do supporters see their own parties? For Conservative voters, Stephen Harper's party is intelligent (56%), strong (50%), and efficient (46%). They aren't foolish (4%), weak (7%), or exciting (7%). In fact, they are the only party whose supporters had "exciting" as one of their bottom three responses. An interesting result, however, is that only 9% of Conservative supporters see their party as compassionate. Seen as a weakness by the right, perhaps?

Green voters are most enthusiastic, with 73% saying the party is down to earth, 65% saying they are open, and 64% saying they are intelligent. Greens don't view their party as arrogant (1%), secretive (3%), or uncaring (3%). At 5%, however, they also don't see themselves as strong.

This just confirms what I've seen in these sorts of polls. People don't particularly like the Conservatives, the Liberals, or their leaders. But they respect them. The NDP and Greens always score well when it comes to likability, but not when it comes to competence. I'm not sure what can be taken out of this. Do Canadians want hard, uncaring people to make the tough decisions in Ottawa?
Posted by Éric at 1:56:00 PM