More on the Ipsos-Reid Poll

The details have been released in yesterday's Ipsos-Reid poll. Some interesting results.

I've already expressed my concerns with the accuracy of this poll, and the regionals haven't changed my mind.

The regionals in British Columbia and the Prairies are notable. In British Columbia, the NDP has dropped to 21% but more interestingly, the Greens are up to 14%. Has Ms. May's announcement of running in that province had an effect? In the Prairies, the Liberals polled only 9% - extremely low. And as you'll see from the other questions in this poll, Ipsos-Reid had trouble finding Liberal supporters in the Prairies. We know they're there, however, since recent polls have given the Liberals two or three times as much support as this one.

This poll would translate into the following seat totals:

Yes, that's right. One short of a majority. The Tory strength comes from Ontario, where they win 64 seats. Their results elsewhere are not out of the ordinary, though they do keep 9 of their 10 seats in Quebec.

Ipsos-Reid included plenty of other questions in this poll.

When asked whether they felt they had a clear idea of the policies the Liberals will enact in government, 44% agreed and 52% disagreed. I actually find that result surprising. People are aware of the policies of any party? Quebecers know about Michael Ignatieff's policies the most (54%), while the Prairies say they have no idea what he is talking about (72%). This is the first of the "we hate Mike" result in the Prairies.

As to what will influence voters, the perceived ability of a party and its leaders to follow through with its promises is tops, at 44%. Quebecers said this is the deciding factor the most, at 50%, while British Columbians don't care if politicians lie (36%).

The ability to handle the economy was second most important, at 37%. This is the top factor for British Columbians (46%) and Quebecers are least likely to consider this important (25%).

Finally, whether a particular party can form a majority is not a winning option - a further nail in the coffin in the Conservative strategy to ask for a majority. Only 14% of Canadians considered this the decided factor. Atlantic Canadians are most likely to be influenced by this, at 24%, while British Columbians are least likely (9%).

What's interesting is when you compare this result to the "should the Conservatives be re-elected result". Here, 45% of Canadians agree while 50% disagree. Looking at these two questions, the Liberals actually come out ahead.

Another question was whether the Liberals would do a better job handling the economic crisis than the Conservatives if they were the ones in power. 43% agree and 51% disagree, with the best/worst numbers coming in Quebec and the Prairies (guess which is which).

Now let's look at the Harper vs. Ignatieff numbers: 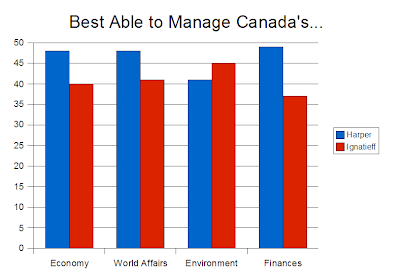 This poll, because it is so different from the trends we've seen, will provide plenty of fodder for Canadian media and has already been the topic of choice in the blogosphere. I have a feeling, however, that the EKOS poll (and perhaps another poll) this week will contradict what Ipsos-Reid has found.
Posted by Éric at 9:07:00 AM