Last month, I wrote about the regional trends in Alberta. Today, we'll look at the two Prairie provinces: Saskatchewan and Manitoba.

A quick glance at the last three elections shows that the two provinces are dominated by the Conservatives, but that there are also some regions open to the NDP and the Liberals.

In terms of the vote share, what we see is a steady Conservative rise over the last three elections, coming almost entirely at the expense of the Liberals. The NDP has remained steady as a rock, while the Greens have slowly shown some gains.

In 2004, with 40.3% of the vote, the Conservatives took 20 ridings in the two provinces. The Liberals, with 30.4%, took four ridings as did the NDP with 23.5%. In 2006, the Conservatives maintained their 20 seats but increased their vote share to 45.6%. The Liberals, though dropping in support to 24.3%, managed to pick up another seat and take five in all. The NDP, which increased their support to 24.8%, lost one seat and took three in all. Finally, last year, the Conservatives continued to improve with 51.1% of the vote and 22 seats. The NDP kept themselves steady at 24.8% and picked up another seat. The Liberals dropped to a woeful 17.2% and only won two seats.

The Conservative strength is constant throughout the two provinces, while the Liberals and NDP pick up most of their seats in Manitoba, and Winnipeg in particular. Ralph Goodale, however, is the Liberal survivor extraordinaire in Saskatchewan.

Breaking this Tory domination seems extremely unlikely, but the Liberals and NDP do have eight seats to fight over in the two provinces - absolutely critical for the two parties in order to have some Western representation. 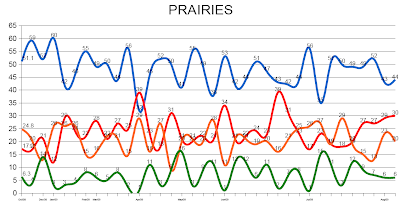 The numbers have remained remarkably steady in the Prairies. The Tories have seen a small drop in support starting around April-May, where results in the 40s became more likely than results in the 50s. But considering their 20-seat haul in 2004 with 40% of the vote, this should not be a concern for them.

The Liberals have also shown some stagnation, but have improved their results from their polling lows in July and are starting to show some life. A result better than the 2006 election is likely, but the Liberals look to be stuck somewhere in the mid-20s.

The NDP has maintained itself at the 23%-25% support level it had in the last three elections. Some weak polling results at the end of July look to be over-come, but the NDP has not shown itself capable of getting out of its current position. Only very rarely has the party polled better than 1 in 4.

Finally, the Greens have shown some modest improvement over some horrible polling results in the first few months of this year. Nevertheless, unlike some of the other regions of the country, the Greens don't look like they will make some big strides forward in the Prairies. Maintaining their vote share looks like a reasonable goal.

The Conservatives are projected to take 21 seats in the two provinces, with the Liberals winning four and the NDP three. This has been locked-in for quite sometime now, which is not surprising considering the consistency of the polls.

The Liberals need to distance themselves from the NDP as well as show themselves capable of competing with the Tories on their own ground - all five seats that they have won in the past should be targeted. This is not a growth area for the NDP, and they need to fight hard to keep their four seats. This is one of the regions where the NDP should be able to defend what it currently holds, and this has to be a top priority. The Prairies gave birth to the NDP, and Jack Layton needs to keep a significant presence here. A return to Saskatchewan, though unlikely, would be a terrific victory.
Posted by Éric at 9:37:00 AM