A few days ago, I wrote about party funding, in response to talk of removing the public per-vote funding from the Bloc Quebecois.

One of the issues I was unsure about was where Bloc funding actually comes from. The Bloc relies on fundraising at the local riding level more than most parties. The Conservatives and some pundits have referred to the Bloc receiving 86% of its revenue directly from the per-vote taxpayer funding. I wrote about how that is inaccurate, as the Bloc raises funds in a different way than other parties.

Thanks to the terrific information compiled by The Pundits' Guide, an incredible source for anything to do with elections, party nominations, and party funding, I can provide you with some more accurate information.

This chart from TPG shows where funding comes from for all five major parties: 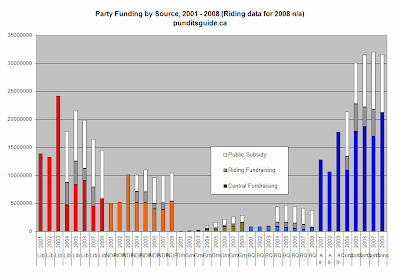 As you can see, parties receive money from three major sources: central fundraising, riding association fundraising, and the public funding (the riding fundraising information for 2008 hasn't been compiled yet, as the info from TPG is only at a preliminary stage). One important thing to take from this chart is that the public funding hasn't replaced central or riding funding for either the Conservatives or the Bloc Quebecois. The argument that the Bloc survives off of the government funding, thus, falls flat. They've only used it to supplement their own fundraising, not replace it.

Prior to the public funding in 2004, the Bloc raised anywhere from $900,000 to $2,000,000 per year. Between 2004 and 2007, the Bloc has raised $1.7 million, $1.6 million, $1.5 million, and $1.2 million, respectively. Obviously, the amount being raised by the Bloc is slowly reducing, but this is still well within their pre-2004 performance. From this we can draw the conclusion that the Bloc is not relying on the public funding more than other parties. The argument, instead, can be made that it is the Liberals and the NDP who rely on this funding more than anyone else.

Let's look at 2007, the last year that TPG has complete information. The Bloc received 71% of its revenue, or $3.0 million, from the public funding (rather than the oft-quoted 86%). The remaining 29% came from their own fundraising initiatives, including $400,000 at the national level (or 10%) and $800,000 (or 19%) at the riding level. Now, as far as I can tell, fundraising at the riding level is far more complicated to compile, and must be reported at a different time than central funding. If I'm wrong correct me, but my understanding is that the parties need to report on their national fundraising on a quarterly basis while their riding association funding is reported on an annual basis. This leads to the mistaken view that the Bloc, which relies on central fundraising far less than the other parties, receives the vast majority of its funding from the public per-vote subsidy. The fact of the matter is that about 1/3rd of the Bloc's funding comes from private donors, and 2/3rds of that comes at the riding level. In 2007, only the Liberals (at 21% or $3.5 million) relied on riding-level fundraising more than the Bloc. The Conservatives and Greens received 15% of their funding at this level, while the NDP received 11%.

That the Bloc doesn't need to raise as much money as the other parties themselves comes as no surprise. Their expenses are much less than the other parties. They only operate in one province, so travel expenses are lower. They only communicate in one language, and they only have to try to reach 7 million people rather than 33 million. Should they be penalised for this? No, as this is a strategic choice by the party. Any of the pan-Canadian parties could choose to focus on one or two regions and so save their money. I'm sure that this is done to some extent, with parties spending a disproportionate amount of their revenue on individual regions.

Minister Steven Fletcher, who brought this issue to the forefront, wrote a letter to the Toronto Star in response to the criticism that his position was anti-democratic because it targeted the Bloc:

While some have advocated ending the per-vote subsidy only for the Bloc Québécois, that is not the position of our Conservative government. We believe that no party should have its operations supported by this taxpayer subsidy and that all parties should be primarily funded by their supporters.

This is clearly a more fair position to take, all parties should be treated equally. But the last part of his letter (We believe that no party should have its operations supported by this taxpayer subsidy and that all parties should be primarily funded by their supporters) nevertheless remains disingenuous. As I've shown in my earlier post, all parties rely primarily on taxpayer subsidies. As a reminder, anywhere from 50% to 75% of public donations are subsidised by the government - you receive 50% to 75% of your donation back on your taxes.

When you look at it in this manner, you see that, in 2007, the parties were funded by taxpayers to the following extent (rough estimates):

Kudos to the Conservatives for relying on taxpayer funding in the smallest proportion, but as you can see all parties rely primarily on taxpayer subsidies. In fact, about $52.6 million in taxpayer funding went to the five parties. Here are the parties' proportion of that funding, compared to the vote received in 2006:

If the per-vote funding was the only funding parties received, it would actually be the most democratic option and would save taxpayer dollars. The conclusion that must be reached, then, is that all parties rely primarily on taxpayer dollars and that to remove the per-vote funding would actually make things less democratic and more unfair. Barring private donations, or removing the subsidy on private donations, would make things for more fair and would reduce taxpayer funding of political parties by about 50%.

The ultimate conclusion, then, is that this entire argument is based on political rhetoric rather than the facts.
Posted by Éric at 9:42:00 AM