More Details on the AR Poll

The details to the Angus-Reid poll from yesterday have been posted.

This poll would've translated into the following seat totals:

As to who would make the best Prime Minister, I was wrong. The "none of the above" was not the favoured option, at 21%. But another 18% said they didn't know. Elizabeth May and Gilles Duceppe managed 2% apiece. 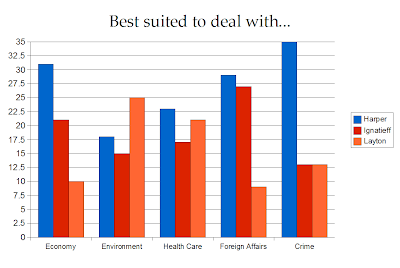 The poll also asked which of the leaders would be best able to handle the economy, the environment, health care, foreign affairs, and crime. The numbers for Ignatieff aren't very good. I think the issue is that people don't know the Liberal leader very well. Layton and Harper have been on the scene for years, people know what they're about. I imagine an election campaign would clear things up.
Posted by Éric at 10:30:00 AM