Back from vacation, and it seems like not much has happened in the last week. There was, of course, the new EKOS poll yesterday. You'll find below the results of polling over the last two weeks, but a look at each individual week of polling would be a good idea as well. 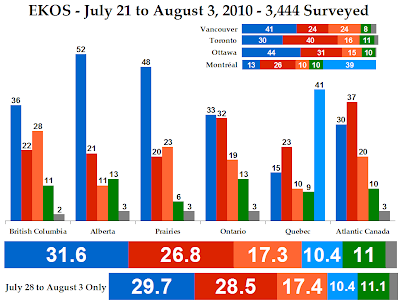 It gets a little dicier when we look at the last week of polling. From the first week to the second week the Conservatives dropped 3.5 points to 29.7% - a very bad number for them. The Liberals were the ones who took advantage, as they gained 3.3 points to 28.5%. The other parties were relatively stable.

Did anything happen to cause such a drop-off in Conservative support, or is this a product of the margin of error?

While we can only speculate now, the answer will probably come in two more weeks when we get EKOS's next poll.

Numbers-wise, the Conservative drop came throughout the country. The party lost a lot of support among males, all of it going to the Liberals. They dropped more than 10 points in British Columbia and the Prairies, eight points in Alberta, seven in Atlantic Canada, four in Quebec, and two in Ontario from the first week of polling to the next. The Liberal gains came in the West (five in BC, 4 in Alberta, and one in the Prairies) but also in Atlantic Canada (five points) and especially Quebec (10 points). Such a wide variation is more likely due to the MOE, but we'll have to wait and see to be sure.

The Liberals lead in Atlantic Canada with 37.1% while the Conservatives are ahead in Alberta (52.1%) and the Prairies (47.9%). There has not been much change in any of these regions. 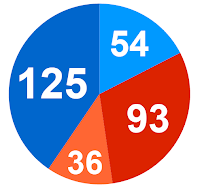 A combination of NDP and Liberal seats would give them 129, barely more than the Tories.

As to those two individual weeks of polling, the Conservatives would win a solid minority with 131 seats in the first week of polling. The Liberals would win 88 and the NDP 35, with the Bloc taking 54 in Quebec.

But in the more recent week of polling, the situation is very different. The Conservatives are reduced to only 113 seats while the Liberals win 99 and the NDP 42. That would give them 141 seats, much more than the Tories. The Bloc would win 53 seats and the Greens would win one in Ontario.

Obviously, that is a very different result.

But it's the beginning of August. Things will change by the time September rolls around and we start thinking about the next session of Parliament. And, of course, this last week of EKOS polling could be an outlier, and things will look less bleak in the next EKOS poll or polls from Ipsos-Reid, Harris-Decima, or Angus-Reid.

Nevertheless, it is fun to see something a little different after months of nothing-much-to-see-here.
Posted by Éric at 10:35:00 AM