A Tale of Three Cities

EKOS is unique among pollsters in that they provide complete demographic and regional breakdowns on a weekly basis. They provide polling data on five cities: Vancouver, Calgary, Toronto, Ottawa, and Montreal.

As Calgary is a foregone conclusion, and Ottawa doesn't have a lot of seats, I've instead focused on Toronto, Montreal, and Vancouver. Each of these cities contain many seats and are battlegrounds.

EKOS uses the metropolitan regions of these cities for their polling, so that means the outskirts as well as downtown. The following charts show EKOS's polling results in these three cities so far in 2010.

As Canada's biggest city, Toronto also has the most seats. Much of the downtown core is solidly Liberal, with a few NDP enclaves won by Jack Layton and Olivia Chow. The Tories are strong on the outskirts of the city, making Toronto's electoral map very simple. But polls in Toronto can answer some questions: can the NDP maintain their bridgehead, will the Liberals re-gain some ground around the city, or will the Conservatives breakthrough downtown? 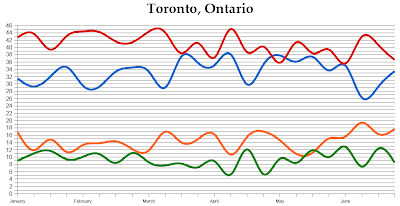 This chart shows that Toronto is a Liberal domain, but it isn't a slam dunk. The Liberals have led in the city without trouble throughout January, February, and the beginning of March, but have since been in a tooth-and-nail battle with the Conservatives. However, it must be pointed out that only on a few rare occasions have the Tories out-polled the Liberals in Toronto. It also appears that the Liberals have re-gained the lead in the city in June.

The NDP is stuck in third, and has been pretty stable in that position, with a slight uptick over the last few months.

Montreal is also easily divided. The Liberals do well on the West Island and in downtown Montreal, while the Bloc dominates in eastern Montreal and around the island. The NDP, however, finally won a seat in Outremont, making the race in Quebec's biggest city a little more interesting. The Conservatives are not a factor in Montreal. 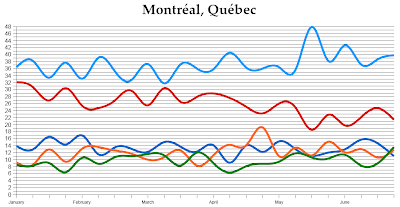 Clearly, the Bloc Québécois has been comfortably ahead of the Liberals over the past six months. But from January to April, the race was much closer. In April, however, the Liberals started to fall away and the Bloc took off, and now the gap between the two parties is approaching 20 points.

The NDP and Conservatives, along with the Greens, have battled it out for third place in and around the city. However, as the NDP's support is more concentrated, they have the advantage.

Vancouver is an interesting city for elections, as all three parties are competitive and all three parties win seats. The Conservatives are mostly relegated to the suburbs, while downtown is the battleground for the Liberals and the NDP. 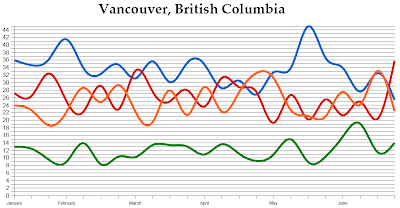 This chart shows how confused Vancouver politics are. The Conservatives have had the lead for most of the past six months, with a huge bump in mid-May, but they have had their lead momentarily stolen from them by the Liberals (in early March, early April, and in the last poll) and the NDP (in late April and mid-June). Those two parties have swapped second place more or less every week. The Greens are not too far back, but are still out of the race.

These charts show that EKOS's city results aren't as unreliable as you might think. Their sample sizes are still relatively large (often larger than those in the Prairies or Atlantic Canada) and trends are pretty clear.

The next election will be fought, primarily, in the cities. The Conservatives have a lock on the rural vote, so the final result will come down to whether the Conservatives can start winning urban votes or if the Liberals and NDP can beat their back into the suburbs.
Posted by Éric at 11:21:00 AM