Big shift on the Prairies changes little in Nanos poll

The latest poll from Nanos Research helps confirm some of the trends that other polls have indicated, but in the end the 13.1-point lead is smaller than it looks. 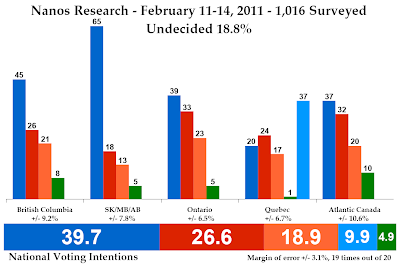 The Conservatives have gained 1.8 points over Nanos's last poll in late November/early December, and lead with 39.7%. The Liberals have dropped 4.6 points and trail at 26.6%, while the New Democrats are up 1.7 points to 18.9%.

This poll was taken before the Bev Oda affair. Its effect on national voting intentions, if there will be any, has yet to be recorded.

The margin of error in this telephone survey is +/- 3.1 points, 19 times out of 20, and 18.8% of respondents were undecided. Note that, unlike other pollsters, Nanos does not prompt survey takers with party names. This tends to reduce Green support compared to prompted polls, but according to one pollster I've spoken to who used both methods in 2008, prompted results tend to be more accurate.

But when we look at the regional breakdown, we see that much of the Conservative gain and Liberal loss is due to huge variations in the Prairies, while the New Democrats make their gain on the backs of Quebecers and Ontarians.

We'll start with the Prairies (MOE +/- 7.8), which for Nanos includes Alberta. There, the Conservatives have gained 18.9 points and now lead with 64.6%. That's a huge jump, representing roughly 3.2 points at the national level - less than the Conservatives actually gained. The Liberals, meanwhile, are down 15.6 points to 18%, a drop equating to roughly 2.7 points nationally. Both of these shifts are outside of the margin of error so we are probably looking at something real, but it means very little in the big scheme of things.

Why? Because despite strength in the Prairies, the Conservatives are showing weakness in British Columbia, Ontario, and Atlantic Canada - at least compared to Nanos' last poll from more than two months ago.

And that's something that should be noted - the last round of polls from Harris-Decima, EKOS, and Ipsos-Reid were being compared to their previous polls in January. Nanos Research, on the other hand, has not reported for some time. 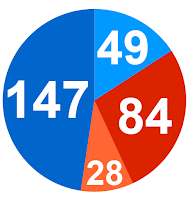 With the results of this poll, ThreeHundredEight would project 24 Conservative seats in British Columbia, 49 in the Prairies (I'm currently not equipped to project for polls which combine Alberta, Saskatchewan, and Manitoba, so have given the Conservatives all seats in Alberta and the seats currently projected to go their way in the Prairies), 52 in Ontario, nine in Quebec, and 12 in Atlantic Canada for a total of 147. That's a drop of one seat from Nanos' last poll.

Yes, that's right. In this poll, the Tories have run up the numbers in the Prairies, where they have little to gain. Even if we give them all 56 seats in the region, they would still only be at 154 in total. Their Ontario numbers just aren't strong enough.

The Liberals would win nine seats in British Columbia, five in the Prairies, 36 in Ontario, 15 in Quebec, and 17 in Atlantic Canada for a total of 84, down five.

The Bloc would win 49 seats in Quebec, down two.

The New Democrats would win three seats in British Columbia, two in the Prairies, 18 in Ontario, two in Quebec, and three in Atlantic Canada for a total of 28, a gain of eight compared to Nanos's last poll. Despite a good national result, their numbers are too weak on the east and west coasts.

Gilles Duceppe was at 22.8% in Quebec while Elizabeth May earned 4.5% of responses.

This Nanos poll will serve to help confirm the strong lead that the other pollsters have shown, but it isn't a necessarily good poll for the Tories. As others have indicated, the Conservatives are starting to rub up against their ceiling, making gains in regions where they have little seat gains to make. It really highlights how Quebec is hurting them - if they were able to bump their numbers up to 25% or more they could start to seriously hope for a majority. Instead, they are planning on incremental, seat-by-seat gains in Ontario. It's a strategy that could work, but leaves little margin for error.
Posted by Éric at 10:21:00 AM