Since horse race numbers can get dull (never), earlier this week Ipsos-Reid released a series of polls conducted for Postmedia News and Global Television that covered a plethora of other political topics. So, let's get right into them.

We'll start with the polls concerning the five party leaders.

The most relevant question asked of the respondents to this online poll was who would make the best Prime Minister. Ipsos-Reid provided three options: 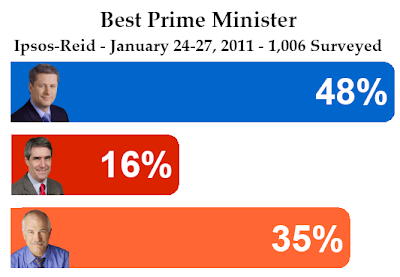 Michael Ignatieff rounded out the three with only 16%. His highest score came in Ontario (19%), while his lowest was in the Prairies (9%).

This would only be remarkable if it was any different from the numbers we've been seeing for months and months. But according to a recent poll from Pollara conducted for the Liberal Party, only 15% of Canadians are paying attention to politics. A campaign will certainly attract more eye balls, and the test for Ignatieff will be whether he can improve his numbers when people are actually paying attention to what he has to say. My gut tells me he will be able to do that, but the question is how successful he will be. Bumping his "Best PM" numbers up to 25% wouldn't even do him that much good.

Ipsos-Reid also asked whether Canadians thought each leader should stay or go if the next election ends in a defeat or a poor performance for their party. The result for Michael Ignatieff is bad, but Harper's is a bit of surprise. 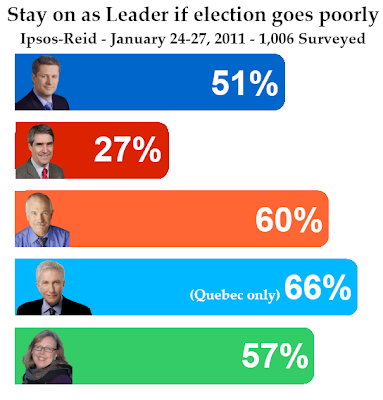 The biggest vote of confidence goes to Gilles Duceppe. Fully 66% of Quebecers say he should stay on even if his next election goes badly (43% said so in Canada as a whole), while 60% of Canadians think Layton should stick around even if things don't go well.

Elizabeth May got 57% on this question.

Next was Stephen Harper, with 51% saying he should stay. That's relatively low, and it is likely that those who said he should stay are those who named him the best man for the top job. But his welcome only seems to go as far as his ability to win, whereas Canadians seem just fine with having Layton, Duceppe, and May in the news indefinitely.

Only 27% of Canadians said Ignatieff should stay if the next election goes badly for him. Without any crosstabs of party support, we can't really say much about that. If that number comes 100% from Liberal voters (but surely it does not), then it isn't all that bad. If 100% of Liberal voters want him to leave if he doesn't win, then that would be significant.

Now, what about the various characteristics and traits the leaders are perceived to have by the Canadian public? Ipsos-Reid asked a similar type of question as Angus-Reid has done in the past, listing some traits and asking whether each leader embodies them.

Michael Ignatieff's were not. Ipsos-Reid gave respondents the chance to parrot back the Conservative advertisement slogan like some mattress store jingle, and 50% agreed that Ignatieff was "not a leader". Another 34% said he was "tired", but 23% said he was "competent". Those were his top three, and that 23% was his third highest score might indicate that a lot of Canadians don't know much about the Liberal leader (except that he isn't a leader).

Almost a majority of Canadians (49%) would like to see the Senate reformed. Ipsos-Reid mentioned making senators elected as a possible reform. This scored highest in Alberta at 59%, but lowest in Quebec at 39%.

Another 18% wanted no change, but there was no significant geographical difference in this opinion.

Finally, what about an election? Apparently, and this will be news to you I'm sure, we might have one soon. But according to Ipsos-Reid, only 36% believe that we need an election to "clear the air", an opinion most prevalent in British Columbia and Quebec. The remaining 64% think there is no need for an election at the moment.

This doesn't jive completely with some of the other numbers we've seen, but it isn't far off.

And so you're now up to date on a bunch of different things. I'm not sure what we can take from any of these polls, as the results are not very surprising. Perhaps most remarkable is how effective the Conservative "not a leader" campaign has been. Whoda thunkit?
Posted by Éric at 1:39:00 PM