When the Conservatives criticized EKOS's most recent poll, Ipsos-Reid told Robert Fife of CTV that they were seeing the same things in their polling. Now released, the poll conducted for Postmedia News and Global Television shows an even wider lead for the Conservatives than in EKOS's poll. 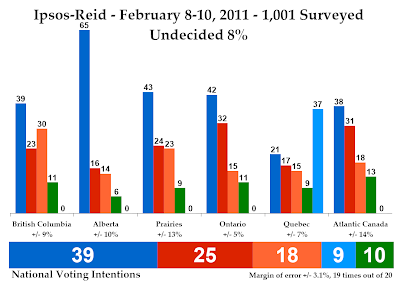 We last heard from Ipsos-Reid at the beginning of February, and since then the Conservatives have gained five points. They now lead with 39%. The Liberals, down four points, trail at 25%.

These gains are outside of the +/- 3.1 margin of error (19 times out of 20) for a random survey of this size, indicating that some real movement is taking place.

The New Democrats are up two points to 18%, while the Greens are steady at 10%. The Bloc Québécois is down two points to 9% nationally.

When we break down the national support numbers by age, we see a very close race in the 18 to 34 cohort: 26% for the Conservatives, 25% for the Liberals, and 23% for the NDP. But among those over the age of 34, the Tories hold a commanding lead. They are also in front among both men and women.

In Ontario, where the MOE for this survey is about five points, the Conservatives have gained six points and now lead with 42%. The Liberals are down eight to 32%, while the NDP is unchanged at 15%. The Greens, at 11%, are up three points. This is not dissimilar from the results EKOS found last week.

The Bloc Québécois has dropped five points in Quebec, but still leads with 37%. The Conservatives are up six points to 21%, echoing some better results we've seen for the Tories in recent polls. The Liberals and New Democrats are up one point a piece to 17% and 15%. All of these variations are within the 7% MOE for Quebec.

In Alberta, the Conservatives are up nine points to 65%, pushing the Liberals down six points to 16%. The NDP is up three to 14%. All of these changes are within the province's 10% MOE.

You may notice that I am rounding the margins of error for the regional results. This is because Ipsos-Reid (like most others) is rounding out their polling results. It just seems simpler, because technically a 42% result in Ontario for the Conservatives might mean 41.5% or 42.4%, making the extra 0.3 in the province's 5.3% MOE somewhat irrelevant. With the results of this poll, ThreeHundredEight would project 18 seats for the Conservatives in British Columbia, 28 seats in Alberta, 20 in the Prairies, 60 in Ontario, 10 in Quebec, and 12 in Atlantic Canada for a total of 149. That is 20 more than were projected for Ipsos-Reid's last poll.

The Liberals would win seven seats in British Columbia, none in Alberta, five in the Prairies, 34 in Ontario, 12 in Quebec, and 17 in Atlantic Canada for a total of 77, 25 fewer than last time.

The Bloc Québécois would win 52 seats in Quebec.

The New Democrats would win 11 seats in British Columbia, none in Alberta, three in the Prairies, 12 in Ontario, one in Quebec, and three in Atlantic Canada for a total of 30, up 10 from last time.