No, I will not make a joke about screech in this blog post. But what I will do is take a look at two new polls released by NTV for Newfoundland & Labrador, as well as a by-election which took place Tuesday.

It's not often that we are blessed with a federal poll conducted for just one of the Atlantic provinces. And with the power of the ABC campaign transforming the political landscape in 2008, Newfoundland & Labrador stands to be one of the more interesting provinces to watch if a federal election takes place this year. Will the Conservatives continue to be shut out from the island, or will they make a comeback?

The new poll conducted by Telelink for NTV indicates that the federal Conservatives are back in full force in Newfoundland & Labrador. Or does it? 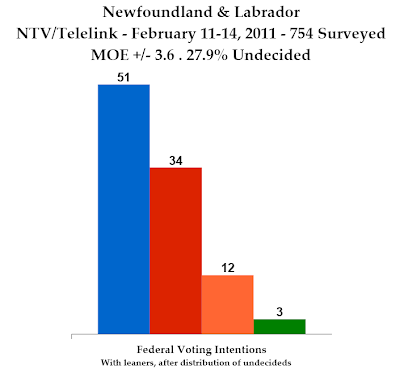 We have no previous Telelink poll to compare these results to, so we shall compare them to the 2008 federal election.

In the NTV report, the intentions of decided voters and decided/leaning voters were reported without a distribution of the undecideds, contrary to common practice. But after removing the non-leaning undecideds from the equation (they number 27.9%, relatively high but not extraordinarily high) we get 51% for the Conservatives, 34% for the Liberals, 13% for the New Democrats, and 3% for the Greens/Others.

That represents a gain of 34 points for the Tories and losses of 13 and 22 points for the Liberals and New Democrats. Seems like a sea change indeed.

That the Conservatives are in the race again is shown by the fact that 32.1% of Newfoundland & Labradorians are decided Tory supporters.

But hold the phone - Telelink? As far as I can tell, they are not a proper public opinion research firm. They are a call centre, with public opinion surveys being one of things they do. You can also outsource your customer service to them.

That isn't to say that their results aren't reliable. Apparently, in the 2007 election they were more accurate than the Corporate Research Associates, the one active polling firm in Atlantic Canada.

However, there is a bit of a problem with this poll. I made some inquiries, and apparently the provincial voting intentions question was asked before the federal voting intentions question. That is a bit of a problem, particularly in a province like Newfoundland & Labrador which has a very different provincial political scene. As the vast majority of decided respondents said they were going to vote Progressive Conservative at the provincial level, if the very next question is how they intend to vote at the federal level there is a much higher probability that they would also respond Conservative. So take these results with a large grain of sea salt.

But leaving that aside, if accurate this poll changes things in Newfoundland & Labrador. Traditionally, with the exception of a close race in 2006, the province has always voted Liberal. The party hasn't been below 40% since 1984 when Brian Mulroney's Progressive Conservatives swept the country.

With these polling results and using a proportional swing method of seat projection, the Conservatives would win four seats and the Liberals three. However, I'm currently looking in-depth at the issue of incumbency, and based on my preliminary findings I would project that the Liberals would retain St. John's South - Mount Pearl and the New Democrats would keep St. John's East. That pushes the Conservative seat projection to two: Avalon and Random - Burin - St. George's, while the Liberals would also win Bonavista - Gander - Grand Falls - Windsor, Humber - St. Barbe - Baie Verte, and Labrador.

Provincially, there has been very little change in voting intentions since the 2007 election. 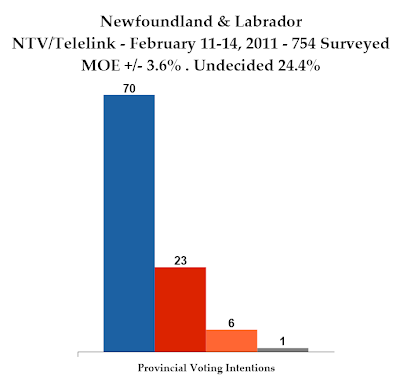 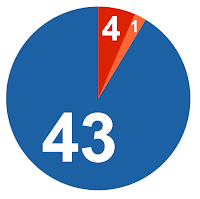 With this result I would project 43 seats for the Progressive Conservatives, four seats for the Liberals, and one for the New Democrats. It's virtually the same result as in 2007, but with one seat gain by the Liberals.

The new premier, Kathy Dunderdale, is the favourite leader at 65.1%, or 79% of decided respondents. Yvonne Jones is next with 11.5% (14%), while Lorraine Michael of the NDP is at 4.2% (5%). Mrs. Dunderdale has, so far, managed to keep up with the dominant numbers Danny Williams had enjoyed before his resignation.

Speaking of which, on Tuesday there was a provincial by-election in Humber West (part of Corner Brook) to replace the former premier. The result came as no surprise, but indicates that the Liberals should be competitive in this fall's general election. 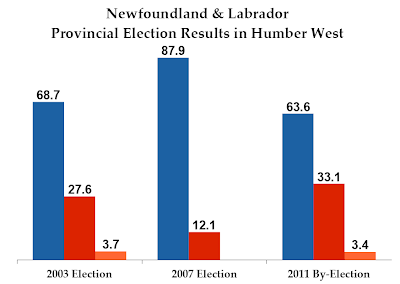 Progressive Conservative Vaughn Granter won the by-election with 63.6% of the vote. Mark Watton of the Liberals placed second with 33.1%, while Rosie Myers of the NDP finished with 3.4%.

That represents a significant drop in support from the 2007 election when Danny Williams received 87.9% of the vote (there was no NDP candidate). But it is almost the same result as in the 2003 election, when Mr. Williams was leading his first general election campaign.

There's not too much to read into this by-election result, except that the departure of Danny Williams has, perhaps, opened a door for the Liberals to make some small gains. He also seems to have given the federal Conservatives a new lease on life. An attention-grabber while in power, even gone the former premier still makes his province one to watch.
Posted by Éric at 10:42:00 AM