Léger Marketing conducted a poll for TVA of the provincial voting intentions of Quebecers, in order to compare them to what the political landscape could look like if François Legault finally does come forward with a new party. The poll shows that the Liberals are up, but also that the Parti Québécois is still in the lead. 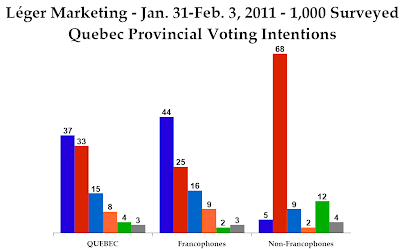 Since Léger's last poll, conducted January 10-12, the Parti Québécois has gained one point and now leads with 37%. The governing Liberals, however, are up four points to 33%.

The Action Démocratique du Québec is up one point to 15%, while Québec Solidaire is down two to 8%. The Greens are down three to 4%.

Unfortunately, Léger did not break this particular poll down by region, but did break it down by language. The PQ still has a huge lead among francophones, and his up one point to 44%. The Liberals are up four points to 25%, while the ADQ is up one to 16%.

Among non-francophones, the Liberals are up four to 68%, followed by the Greens at 12% (unchanged) and the ADQ at 9% (down one). 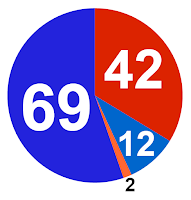 This poll would result in 69 seats for the Parti Québécois, 42 for the Liberals, 12 for the ADQ, and two for Québec Solidaire. For the ADQ and QS, that is unchanged from Léger's last poll, but the Liberals have gained five seats at the expense of the PQ.

But what about Legault and his hypothetical new party? It's a popular option, with 25% opting for it. The PQ still garners 30% of the vote, compared to 24% for the Liberals and 9% for the ADQ. Legault would draw away votes from every party, but particularly the ADQ and the PQ.

Léger also asked about a potential Legault-ADQ aligned party, which to me is just asking how people would vote if Legault led the ADQ. It's a more popular option, and would split the voting public with 31% voting for both the PQ and the Legault-ADQ.

But there is a problem with this line of questioning. In the poll, Léger calls Legault's movement and potential party "nationalist and centre-right". That is generally how Legault has been perceived to be leaning. But Legault has also called his movement "une gauche efficace", or an "effective left". So which is it? And if Léger had described the party as "une gauche efficace", how would that have changed how people responded?

While it's clear that neither the PQ nor the Liberals are creating a lot of enthusiasm in Quebec, it's unclear whether this desire to support Legault and his hypothetical party has more to do with a "none of the above" tendency rather than anything particularly interesting about this non-existent, undefined party. I imagine it is the former.

But Legault is preferred to the other two individuals who are most likely to win the next election in Quebec. While 20% say Jean Charest is the best person to be Premier and 21% believe it is Marois, 30% think Legault is best suited for the job.
Posted by Éric at 9:41:00 AM