When it rains, it pours. It isn't strange for a week to pass without a poll, but sometimes it seems that they all try to get their say in at once. We had a "controversial" EKOS poll on Friday, a passed-around article from the Canadian Press on polling on Sunday, polls from Léger Marketing and Ipsos-Reid on Monday, and now today we have a poll released by Harris-Decima and a federal poll conducted for Newfoundland & Labrador by NTV. I also have two provincial polls I have to get to and a Newfoundland & Labrador by-election taking place tonight.

So, I need to get this out of the way before we pass into the second half of February. Yes, it's the January best/worst case scenarios!

January did not have a lot of polling, so in all of these best and worst case scenarios the ranges have narrowed, rather than expanded in any direction.

Let's start with the New Democrats. Their best case scenario would put them at 36 seats, exactly where they currently are in the House of Commons. With 19.6% of the vote, they would win 11 seats in British Columbia, none in Alberta, five in the Prairies, 13 in Ontario, two in Quebec, and five in Atlantic Canada.

But in this scenario the Conservatives and Liberals win about the same amount of seats as they have now, so that means no real change. 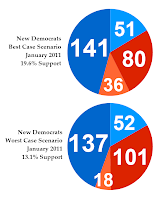 Their worst case scenario would reduce them to only 18 seats. With 13.1% of the vote, they would win three seats in British Columbia, none in Alberta, two in the Prairies, 12 in Ontario, one in Quebec, and none in Atlantic Canada.

For the Liberals, their best case scenario in January still keeps them out of power. They would win 110 seats, 12 fewer than the Tories. But with the NDP they could outnumber the Conservatives.

With 31.4% of the vote, the Liberals would win 12 seats in British Columbia, two in Alberta, seven in the Prairies, 45 in Ontario, 15 in Quebec, and 27 in Atlantic Canada. 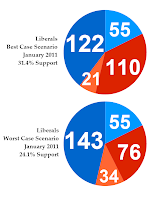 Their worst case scenario, however, would peg them at 76 seats. With only 24.1% of the vote, the Liberals would win four seats in British Columbia, none in Alberta, one in the Prairies, 40 in Ontario, 12 in Quebec, and 17 in Atlantic Canada. The Conservatives would win 143 seats, giving them as many as they currently have in Parliament.

For the Conservatives, their best case scenario is another minority government. They could only have won 146 seats in January, three more than they currently hold. With 37.3% of the vote, they would win 23 seats in British Columbia, 28 in Alberta, 22 in the Prairies, 54 in Ontario, eight in Quebec, and 10 in Atlantic Canada. The opposition would be unlikely to oust the government in such a situation. 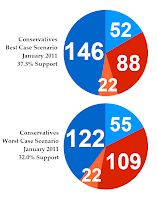 But with recent polls, it appears that January was far more calm than February will turn out to be.
Posted by Éric at 4:21:00 PM