Recently, I've been looking at the issue of incumbency and how to factor its effect into my upcoming riding-level projection model. The investigation resulted in an article for The Globe and Mail, but I had focused on one aspect of incumbency in that piece: the re-election rate.

I've continued my analysis and have now gone through all 308 ridings for the 2006 and 2008 elections. Rather than focus on re-election, I have focused on an incumbent's ability to out-perform, or under-perform, their party. This is very useful for projecting electoral outcomes.

However, I didn't stop there. I broke it down by party and the number of times an incumbent had been re-elected before. Looking for patterns and trends, I found that in some cases there is a statistically significant incumbency effect. 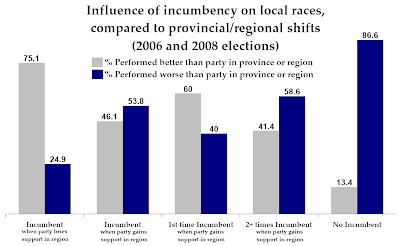 When an incumbent's party loses support in a province or region (region being the Prairies and Atlantic Canada), the incumbent loses support at a lower rate than their party in 75.1% of cases (333 such cases in 2006 and 2008). In only 24.9% of cases does an incumbent lose a greater proportion of support than the party as a whole. That's significant, and on average an incumbent out-performs a sinking party by 8%.

However, when a party gains support in a province or region, an incumbent performs worse in 53.8% of cases. Assuming that the incumbent vote has a higher degree of stability, we would assume that they would tend to increase their support at a lower rate than their party, but 53.8% of 195 cases is not very significant. It is even less so when you average out the "incumbency effect" when a party gains: 1.00. If you extend it to a few more decimal places you get a slightly negative effect, but the incumbency effect when a party is gaining seems to be virtually zero. If a party has a gain in support, incumbents tend to increase their support at the same rate in their riding.

Breaking down an incumbent's performance by party when that party gains support in a particular region did not show any significant variations. Liberal incumbents did much worse than their colleagues, but there was not a large enough sample size (14) to determine anything significant from it.

That was not the case when an incumbent's party loses support in a particular region. Breaking that down by party did show a large degree of variation, with New Democratic incumbents appearing to be the most secure. This would, on the face of it, make some sense. Voting for the NDP is very different from voting for the Liberals or the Conservatives - it is almost certainly a vote for an opposition party. This means that voters in NDP ridings tend to like their NDP MPs quite a bit, and/or believe strongly in the role of the NDP in Parliament. Voting Liberal or Conservative, on the other hand, seems to be a coin toss far more often.

After the NDP, Liberal incumbents performed best, followed by the Conservatives. There isn't a huge amount of variation between the three parties, but enough that it equates to roughly three points for a Conservative incumbent and five points for an NDP incumbent. The one party that showed a great degree of difference from the others was the Bloc Québécois. Their incumbents tend to see their vote shift at almost the same rate as their party as a whole.

There was very little variation, on the other hand, when breaking down incumbents (in cases where the party loses support) by the number of times they have been elected in the past. The factor varies only from 1.06 for 4th-time incumbents to 1.10 for 3rd-time incumbents, with 1st-time, 2nd-time, and 5th+-time incumbents falling in between.

But when a party gains support in a region, there does seem to be a difference between sophomore MPs and more veteran MPs. Sophomore incumbents (i.e., incumbents who were elected for the first time in the previous election) did better than their party (when their party increased its support in the region) in 60% of cases. This makes sense - when an MP is first elected voters are less sure of them. When they stand for election for a second time, there is a greater chance that more voters will flock to them, even at a greater rate than voters switch over to that party in a given province or region.

The last aspect of incumbency I looked at was when there was no incumbent. Whether by retirement, death, or disgraceful resignation, I looked at what happened in a riding after an incumbent MP did not stand for re-election. The result was that only in 13.4% of cases did the incumbent party do better in the open seat than their party did in the region or province as a whole. In 86.6% of cases, the rookie candidate for the incumbent party did worse than the party did in the province or region as a whole, and there was no significant variation between whether a party increased or decreased its support in the region. And the drop in support was significant, enough to reduce a healthy 40% to a risky 35%.

Incumbency is the last major factor I wanted to look at before building my new projection model. The results of this analysis have been added to the model with success, bumping the accuracy rating up by 10%.

I tested the model for both the 2006 and 2008 elections, and it performed at a high degree of accuracy. I will present the results of the tests later this week or next.

I am currently working on expanding the new projection model into the other provinces. I'm working on Alberta at the moment, and hope to have it all up and running in the next few weeks. Every factor input into the model is verifiable, testable, and evidence-based. The tests of the model have, so far, proven its validity. When the test results are presented, I will provide detailed methodology as well. The new projection model will provide projections for all 308 ridings, taking into account their individual characteristics where possible.

I'll leave you with one little tidbit on what the projections for British Columbia are now showing: it's beneficial to the NDP. But the new model still shows that the Liberals are poised for gains in the province.
Posted by Éric at 9:00:00 AM