"In the past, pollsters, have sometimes reported support for our Party that is unusually high relative to the prevailing data, only to have the anomaly corrected in a subsequent poll, giving the artificial impression of negative momentum," says the Conservative talking points memo sent out to staffers and supporters, as well as some journalists in Ottawa like Jane Taber.

This is in response to EKOS's new poll, which gives the Conservatives a wide lead of 12.5 points. According to the Conservatives, this poll is "inconsistent" with "recent published surveys" and their own "internal polling". The Tories are warning people not to get caught up in the results, as the Conservatives will probably drop in EKOS's next poll, giving them negative headlines.

Though they didn't say it explicitly, given the Tories' history of problems with Frank Graves it stands to reason that they are implying more than just a statistical anomaly.

"The polls are cooked!" kind of talk is nothing new. I see it in the comments written in response to my posts here and my articles for The Globe and Mail. It's tin-foil-hat, Moon-landing-was-faked kind of talk.

But why don't we see if the Conservatives are on to something? Is this poll inconsistent with other recent polls?

Well, for starters, the most recent poll that was released before EKOS's was by Ipsos-Reid, and it ended on February 2, two days before the EKOS poll entered the field.

And as the following chart shows, taking into account the +/- 2.4 margin of error of this EKOS poll and the +/- 2.2 to 3.1 margins of error in other recent polls puts EKOS's results well within the range of the other pollsters. 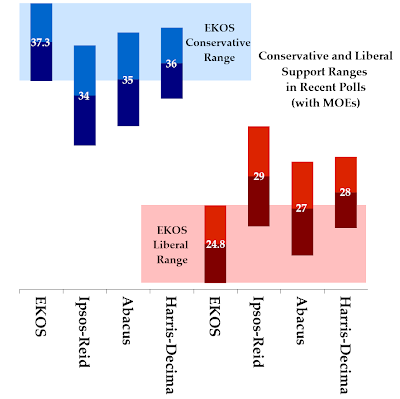 If the next EKOS poll does bring things back to what we've been seeing for months, it will either be a natural correction of the margin of error or a real return to normal behaviour for Canadian voters after two weeks of support switching. It's not necessarily an anomaly.

In their memo, the Conservatives say "as always, we do not comment on polling." In this case, they probably should have followed their own directive. It's just one poll, after all. But I suppose it hedges their bets just in case things do reset themselves in two weeks.

What of the poll? Well, here are the results: 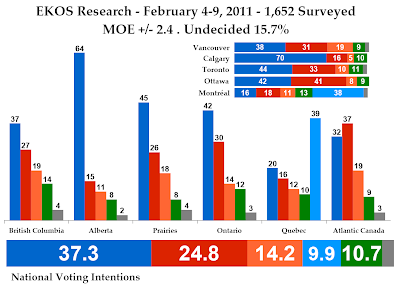 Yes, the Liberal number is very low. But according to a comment made by Ipsos-Reid to CTV's Robert Fife, reported on Twitter, they are seeing similar results in their polling. EKOS might be on the low end of their MOE, or they might be catching something before any other pollster. We'll just have to wait and see. 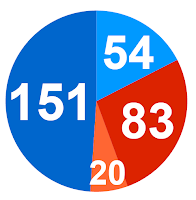 With this poll, the Conservatives would win 22 seats in British Columbia, 28 in Alberta, 20 in the Prairies, 62 in Ontario, nine in Quebec, and nine in Atlantic Canada for a total of 151. That's 11 more than in the projection for EKOS's last poll, but still not a majority.

The Liberals would win 11 seats in British Columbia, none in Alberta, six in the Prairies, 33 in Ontario, 11 in Quebec, and 20 in Atlantic Canada for a total of 83, 11 fewer than last time.

The Bloc would win 54 seats in Quebec, up two.

The New Democrats would win three seats in British Columbia, none in Alberta, two in the Prairies, 11 in Ontario, one in Quebec, and three in Atlantic Canada for a total of 20, down two. Sorry, but 14.2% is not enough for the NDP to keep 30 or more seats. While the Conservatives can take advantage of Liberal and NDP weakness to win six more seats than they have now (eight more if we don't count Prentice's and Hill's vacated seats), the Liberals can take advantage of the NDP and gain six as well.

As always when a poll shows some major changes, we need to wait and see if they will be confirmed by others. So don't freak out yet.
Posted by Éric at 10:13:00 AM