It appears that the pollsters now disagree once again. Abacus Data has come forward with a new set of numbers, showing that the Conservatives hold a massive 15-point lead, and arguing that the gap has not narrowed as EKOS Research has recently found.

However, we should not compare apples to oranges. EKOS conducted its poll over two full weeks, while Abacus's survey was conducted on one day. Without daily tracking of the EKOS poll, we cannot say with any real confidence that these two polls are contradictory. For all we know, in the last few days of EKOS's poll the Conservatives could have had a double-digit lead.

In other words, this poll needs to stand alone and not be compared to the recent EKOS survey. If other polls show that the Conservative lead is still in place, then Abacus's poll will simply provide further evidence. If, on the other hand, they show that the Conservatives have lost support, there is a very good chance that Abacus was accurately recording the voting intentions of Canadians on February 23 only.

Enough with the preamble, now to the poll. We don't often get one-day polls, so it is an interestingly precise snapshot in time. 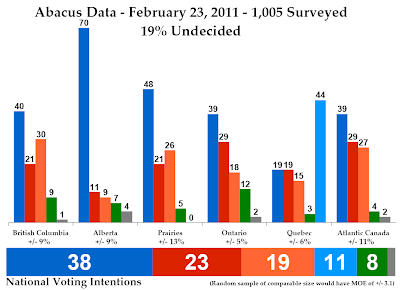 Since Abacus's last poll in late January, the Conservatives have gained three points and now lead with 38%. The Liberals, on the other hand, have dropped four points and are down to a woeful 23%.

This poll was conducted online, and a random sample of similar size would have a margin of error of +/- 3.1 points, 19 times out of 20. But according to this paper, it is simplistic and inaccurate to say that, based on the 3.1 MOE, only the Liberal shift is statistically significant.

Based on this paper it appears that virtually everyone talks about the margin of error incorrectly, including in the recent Canadian Press piece on polling. I'm not sure how to approach this in the future, but I will be taking more care before announcing any shift as statistically significant or not.

Today's post is quite tangential, so let's get back to it. The New Democrats are up one point to 19%, while the Bloc Québécois is up one to 11%. The Greens, meanwhile, are down one to 8%.

Regionally, we see a lot of the same things that other polls have shown. In Ontario, the Conservatives are up one point to 39%, while the Liberals are down seven to 29% (though apparently even that is not a statistically significant drop). The New Democrats are up two to 18%, while the Greens are up three to 12%.

In Atlantic Canada, the Conservatives are leading with 39%, up nine points. The Liberals are down 15 to 29%, while the New Democrats are up four to 27%. Again, even these wild shifts appear to not be statistically significant. 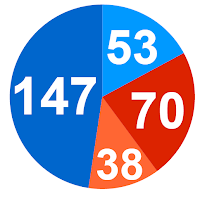 With this poll, I would project 19 Conservative seats in British Columbia, 28 in Alberta, 21 in the Prairies, 58 in Ontario, eight in Quebec, and 12 in Atlantic Canada for a total of 147, a gain of 14 seats compared to the projection for Abacus's last poll.

The Liberals would win six seats in British Columbia, none in Alberta, three in the Prairies, 31 in Ontario, 13 in Quebec, and 15 in Atlantic Canada for a total of 70, down 18.

The Bloc Québécois would win 53 seats in Quebec, down two.

The New Democrats would win 11 seats in British Columbia, none in Alberta, four in the Prairies, 17 in Ontario, one in Quebec, and five in Atlantic Canada for a total of 38 (+6).

For regular readers, note that the new projection model is in place for British Columbia and Alberta.

Abacus also helpfully asked the question Angus-Reid neglected to on the topic of Bev Oda. Do you know who she is? Amazingly, 46% of respondents said they did. It would appear that the 15% of Canadians who pay attention to politics are joined by another 31% who aren't exactly ignorant of what is going on in Ottawa.
Posted by Éric at 9:57:00 AM