PCs lead in Alberta and Ontario, PQ in Quebec

My list of topics to cover grows each day, so instead of taking these provincial polls one at a time here are the latest numbers from Ontario, Alberta, and Quebec, with a provincial polling trends update.

We'll start with a Nanos poll from Ontario, conducted at the end of January and the beginning of February. It shows that the Progressive Conservatives hold a narrow lead over the governing Liberals. 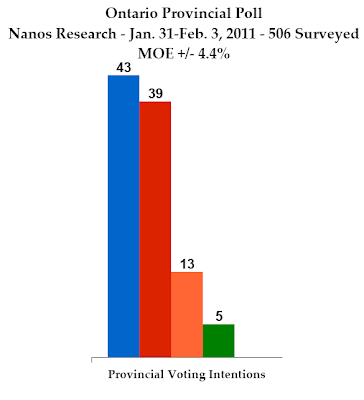 Nanos's last poll for Ontario dates from February 2010, so this gives us an opportunity to determine how things have played out over the last 12 months.

Not much has changed. The Progressive Conservatives now hold the lead, and have gained five points. They stand at 43%, followed by the Liberals at 39%, down two points. The New Democrats are unchanged at 13%, while the Greens have dropped three points to 5%.

This telephone survey has a margin of error of +/- 4.4%, 19 times out of 20. Considering the narrow shifts, only the Progressive Conservative gain seems to be statistically significant. But Ipsos-Reid's last poll in January showed a similar gap between the two main parties. 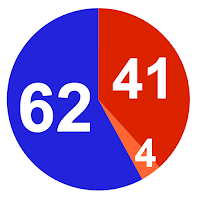 With this poll, ThreeHundredEight would project 62 seats for the Progressive Conservatives, 41 for the Liberals, and four for the New Democrats. That means a majority government for Tim Hudak.

That is, apparently, not a huge problem for Ontarians. Asked whether the leaders would have a positive or negative impact on their local voting intentions, respondents said that Hudak had a more positive impact (36.9%) than a negative one (12.7%). This contrasts with Dalton McGuinty's 26.8% positive to 33.3% negative score.

The race is also surprisingly close in Alberta, at least compared to the province's homogeneous political history. An Environics poll conducted at the end of January, in the midst of Premier Ed Stelmach's resignation announcement, shows that the Progressive Conservatives still hold the advantage in the province, but are being closely trailed by the right-wing Wildrose Alliance. 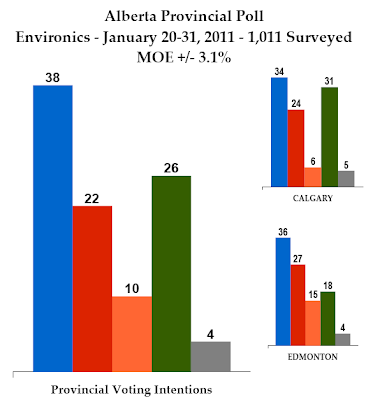 Environic's last poll conducted in November showed a narrower gap between the two parties. The Progressive Conservatives have gained four points since then, and now lead with 38%. The Wildrose Alliance has dropped six points to 26%, while the Liberals are up three points to 22%.

The New Democrats are down three points to 10%, while the Others are at 4%. How much of that vote is occupied by the centrist Alberta Party is, unfortunately, unknown.

In Edmonton, the race is between the PCs and the Liberals, who are at 27%. The Wildrose Alliance has dropped seven points in the capital, and are third with 18%.

In Calgary, however, the Wildrose Alliance is not far behind the PCs with 31%, while the Liberals stand at 24%.

And in the rest of Alberta, the Wildrose Alliance trails the PCs with 29%, with the Liberals in third at 15%. 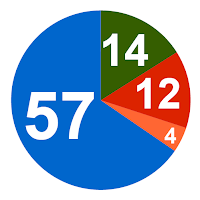 Next, we will take a look at Quebec, where Léger Marketing has been furiously polling. The firm has been conducting two sets of polls, one for Le Devoir and the Montreal Gazette, and the other for the QMI Agency. As the latter set of polls are focused on the emergence of a political movement led by François Legault, and is less detailed, it makes more sense to compare this latest Léger poll to the last poll they conducted for Quebecor. 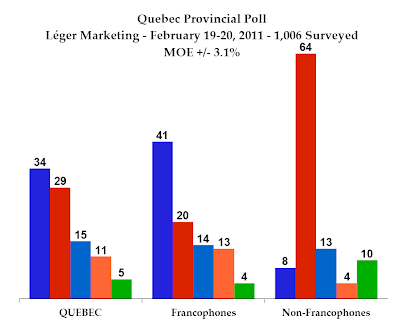 Since then, the Parti Québécois has lost three points but still leads with 34%. In fact, the gap has widened as the Liberals have dropped four points to 29%.

The ADQ is steady at 15% while Québec Solidaire has gained three points. They now stand at 11% in Quebec.

The PQ leads among francophones with 41%, followed by the Liberals at 20% and the ADQ at 14%. Among non-francophones, the Liberals dominate with 64%. The ADQ is next with 13% while the Greens stand at 10% among this demographic. 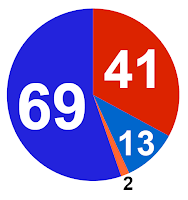 With this poll, ThreeHundredEight would project 69 seats for the Parti Québécois, 41 for the Liberals, 13 for the ADQ, and two for Québec Solidaire. More or less par for the course.

But it is on the question of Legault's new movement that this poll is interesting. Contrary to the last time Léger polled, Legault's movement has not been called "centre-droite" in their questioning. This is good, because Legault has refused to pigeon-hole himself but has called his movement "gauche-efficace", or an effective left.

Fully 30% of Quebecers are prepared to vote for his phantom party. The PQ would be reduced to 24%, tied with the Liberals, while the ADQ would drop to only 9%. No wonder that Gérard Deltell is openly talking about an alliance with Legault.

Though the projection model is not designed for the inclusion of a completely new party, a crude projection would give Legault 63 seats, a majority of one. The PQ would win 34 seats and the Liberals 25, while Québec Solidaire would win three seats.

Of course, Legault would have to find 62 people to sit with him. Who would these people be? How would Legault run a campaign with a bunch of political novices? Who knows.

Nevertheless, Quebecers seem open to Legault, with 47% saying he should launch a party. Another 28% said he shouldn't, and 25% said they didn't know.

What's interesting is that when asked whether they agreed with his positions, almost half (46%) said they didn't know, while 39% said that they did agree with him. Apparently, Quebecers just want another option, whatever it is. Without crosstabs we don't know, however, whether that 46% of people who don't know Legault's position were drawn from the 53% of people who said that Legault shouldn't launch his party or who had no opinion.

Now to the provincial polling trend update. This chart shows the averages of all of the provincial polling results released each month, with polls that had field dates that straddled two months being part of the average for both those months. Months without any polls are considered to have the same levels of support for each party as the last month in which there was a poll. This gives us some straight lines that only shift once new polls appear. 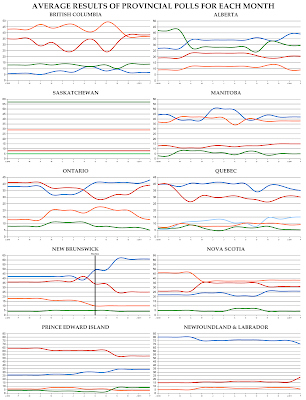