Ranking the BC NDP leadership candidates

Note, based on the feedback from last week's ranking, I've halved the weighting I've given to the opinion of Liberal voters for this ranking.

But before we get to that, let's get to the actual findings of this poll. Interestingly, 48% of British Columbians are in favour of holding an election in 2011, after both leadership races are completed. That means in the spring or summer. If a federal election also takes place this spring, and with the provincial elections scheduled for the fall, the country could be in a constant campaign for the rest of the year.

However, 43% of British Columbians said that the next election should be held on May 14, 2013, as the law stipulates. Not surprisingly, Liberal voters prefer to have the election in 2013, while NDP voters want to have it now. The NDP has nothing to lose, really.

For their leadership race, Mike Farnworth seems to be emerging as the front runner. But as some pundits have noted, the NDP race has a lot of similarities to the Liberal race. Farnworth is to the NDP as Christy Clark is to the Liberals, the popular choice but not a leader at the centre of the party. Adrian Dix is the NDP's Kevin Falcon, a party favourite but one that comes with negative baggage. And John Horgan is the NDP's George Abbott, an inoffensive choice.

Among all British Columbians, Farnworth gets the best positive rating. Fully 40% have a good opinion of him, compared to 12% who don't. For Dix, only 20% like him, compared to 26% who have a negative opinion of him. John Horgan is in between, but there is a lot of neutrality or "don't knows" when it comes to Mr. Horgan.

New Democratic voters, however, don't have as much of a problem with Dix. He gets a 28%/17% positive split. But Farnworth does much better, with 49% of NDP voters having a positive opinion of him, compared to only 4% who don't.

Now, to the ranking. What I've done is given each candidate points based on their standings on the three questions Ipsos-Reid asked: impressions, and likelihood that a particular candidate would encourage people or discourage people to cast their ballot in favour of the NDP. The top ranked candidate for each question gets six points, the second-ranked gets five, and so on.

Note that the following chart is not the actual result of the Ipsos-Reid poll, which does not ask who would make the best leader or premier. 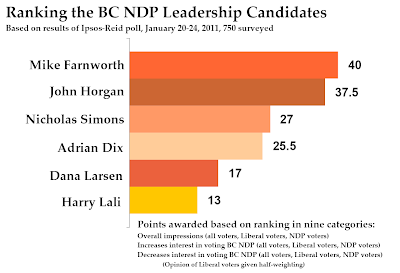 Not surprisingly, Mike Farnworth comes out on top, being the top-ranked candidate in six of the nine questions. John Horgan comes in at second, showing how he is the safe second choice for a lot of voters. That role did well for Ed Stelmach and Stéphane Dion in their respective leadership races.

The biggest surprise is that Adrian Dix does not come in third, but in fourth. Nicholas Simons, one of the MLAs rumoured to have pushed Carole James out, comes in third. This might be more of a factor of people not having a solid opinion on him either way (55% of respondents said they had never heard of him), and Dix lost points for the negativity that seems to be attached to his name.

This ranking is not about predicting who will become the next leader or who would make the best leader. Dix has a lot of support within the party, and in the end the race could come down to he and Farnworth. But what this ranking does show is that Farnworth or Horgan seem to be far more safer choices than the controversial Dix.
Posted by Éric at 1:26:00 PM