A new poll from Ipsos-Reid conducted for Global Television and Postmedia News (reported on here in full by the National Post) shows that the Conservatives have dropped from their lofty heights of early December and are back down to their habitual five-point lead. 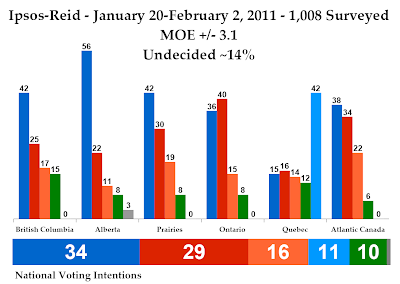 In that last poll, the Conservatives were at 39%, the highest of any of the December polls. They are now at 34%, which is probably more of a reset from the higher end of December's margin of error than anything else. The same can be said of the New Democrats, who have risen four points from 12% to 16%. The Liberals are unchanged at 29%.

The Bloc Québécois is up a point nationally to 11%, while the Greens are up one to 10% in this telephone poll.

As we've seen in other polls, the Liberals are highly competitive, and in this case leading, among women. The Conservatives hold a large lead among men, however.

The best bit of news for the Liberals in this poll comes in Ontario, where the party has gained six points and now leads with 40%. The Conservatives are down three points to 36%, while the NDP is up one to 15%. The Greens, at 8%, have lost three points.

In Quebec, the Bloc leads with 42%, up one from December. The Liberals are down six to 16%, as are the Conservatives, who have dropped to 15%. The NDP is up seven to 14%, meaning there is a huge logjam among the federalist parties, particularly when you add in the (unlikely) 12% of the Greens.

Things are far more stable in British Columbia, where the Conservatives are down two points to 42%. The Liberals and NDP are both down one point as well, to 25% and 17%. The Greens are up three to 15%.

The Conservatives lead in Atlantic Canada with 38%, while the Liberals are down 10 points to 34%. The NDP, at 22%, has gained seven points.

In Alberta, the Conservatives have dropped nine points but still lead with 56%. The Liberals are up six to 22%, while the NDP is up five to 11%.

And in the Prairies, the Conservatives are down seven points to 42%, followed by the Liberals at 30%. 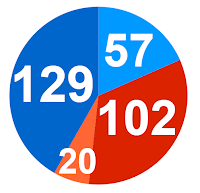 With the results of this poll, I would project 24 Conservative seats in British Columbia, 26 in Alberta, 20 in the Prairies, 42 in Ontario, five in Quebec, and 11 in Atlantic Canada for a total of 129. That is 18 fewer than in my projection for Ipsos-Reid's last poll.

The Liberals would win 10 seats in British Columbia, two in Alberta, six in the Prairies, 54 in Ontario, 11 in Quebec, and 17 in Atlantic Canada for a total of 102 seats, eight more than in December.

The Bloc would win 57 seats in Quebec, up five.

The New Democrats would win two seats in British Columbia, none in Alberta, two in the Prairies, 10 in Ontario, two in Quebec, and four in Atlantic Canada for a total of 20, five more than in Ipsos-Reid's last poll.

Again, not much to say about the latest poll. It appears that voting intentions really are stuck, as they are almost all within their own MOE of my projections. The Quebec numbers may be one to watch, however. If all three of the main national parties are below 16%, the Bloc will have a field day.

Watch for a new projection for The Globe and Mail on Monday.
Posted by Éric at 1:03:00 PM