A new Léger Marketing poll conducted for Le Devoir and the Montreal Gazette shows very little change in the provincial and federal voting intentions of Quebecers. But it appears that Liberals at both levels are losing clout in and around Montreal. 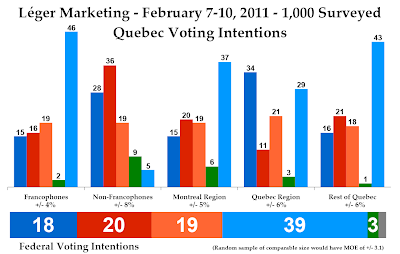 Note that the provincial results are included below. Compared to Léger's last complete data set released in January, the Bloc Québécois has made a three-point gain in the province and now leads with 39%. The Liberals are up one to 20%, the New Democrats are steady at 19%, and the Conservatives have picked up one point and trail with 18%. The Greens have lost three points and are at only 3% in the province.

Léger uses an online panel for its polling, but their panel was randomly recruited by telephone. This sort of muddies the waters compared to other online panels that were not recruited in this way. But a random sample of 1,000 people would have a margin of error of +/- 3.1 points, 19 times out of 20. That means that at the provincial level none of the parties have had a statistically significant change in support.

There has been some noteworthy movement in and around Montreal, however. There, where the MOE is about five points, the Bloc has gained six points and now leads with 37%, well ahead of the Liberals. They are at 20%, down seven points from last month. The NDP is up three to 19% while the Conservatives are steady at 15%, but a small gain among non-francophones for the Tories leads one to believe that the Conservatives may be making up some ground on the Liberals in the anglophone parts of Montreal. The gap between the two parties is now eight points among non-francophones, representing a five point loss for the Liberals (36%) and a two point gain for the Conservatives (28%).

One of things that will be worth watching in Léger's next monthly report will be the change of vote, if any, in the Quebec City region. Will the recent announcement of the building of a new arena in the city without the federal government's help change anything? Currently, the Conservatives are leading with 34% (-1), while the Bloc is a close second at 29% (+1). The NDP is steady at 21% while the Liberals are up one to 11%. 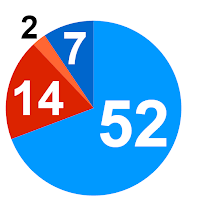 This would result in 52 seats for the Bloc Québécois, 14 for the Liberals, seven for the Conservatives, and two for the New Democrats.

Léger asked respondents in which leader they placed their confidence. Gilles Duceppe came on top with 29% (35% of those who responded with a name). Jack Layton came second with 27% (32%), while Stephen Harper (15%/18%) and Michael Ignatieff (8%/10%) followed. This is an indication of the NDP's potential for growth in the province, while also showing how the Liberals are limping along on brand-name only.

Among non-francophones, Layton is still in front with 26%, followed by Harper (21%) and Ignatieff (10%). That bodes well for the Tories' chances in the West Island.

Now to the provincial scene, where talk of the fictitious François Legault party has warped things out of all recognition. 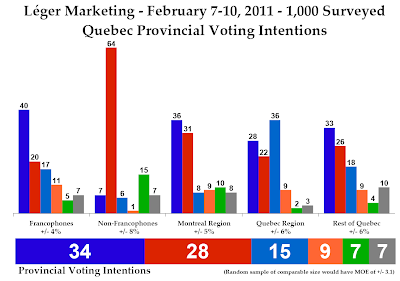 At the provincial level, we see no changes outside of the MOE. The Parti Québécois is down two to 34%, the Liberals are down one to 28%, and the ADQ is up one to 15%. Québec Solidaire has dropped one point to 9% while the Greens are unchanged at 7%.

But the other parties are up three points to 7%. I find it unlikely that all of that vote will go to the Marxists-Leninists or the Indépendantistes. If we pared that down to a more reasonable 2%, and distributed the other 5% proportionately, we'd get 36% for the PQ, 29% for the PLQ, 16% for the ADQ, and 10% for QS.

As at the federal level, the Liberals have suffered a noteworthy drop in and around Montreal. There, the PQ leads with 36%, up two points. The Liberals are down seven to 21%, while the Greens are up one to 10%.

In Quebec City, the ADQ has dropped three points but leads with 36%, virtually mirroring the Conservative support in the region. The PQ is unchanged at 28%, while the Liberals are up three to 22%.

And in the rest of Quebec, the PQ has dropped six points to 33%, while the Liberals are up five to 26%. 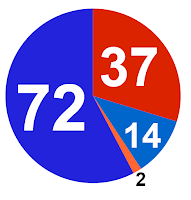 This poll would result in 72 seats for the Parti Québécois, 37 for the Liberals, 14 for the ADQ, and two for Québec Solidaire. Generally, what we've been seeing for months.

Only 19% of Quebecers are satisfied with the government, and only 17% see Jean Charest as the best person to be Premier. That number is bumped up to 27% when we take out the 37% who had no response. Pauline Marois is at 19% (30% of "decideds), while Amir Khadir of QS is at 13%/21%, tied with Gérard Deltell. Like the NDP, QS appears to have some significant room for growth in Quebec, but unlike the federal scene it appears that the main sovereigntist party could suffer.
Posted by Éric at 3:32:00 PM