A new poll was released last night from Abacus Data, for Sun News. This poll will undoubtedly raise a few eyebrows, considering that it pegs Progressive Conservative support at 41%, compared to 32% for the Liberals and 20% for the New Democrats.

Obviously, that differs from the two most recent polls from Ipsos-Reid and Nanos Research, and is even at odds with the spate of pre-campaign polls released at the end of August and the beginning of September. The results aren't wildly outside the margin of error of other recent polls, but we're probably looking at either an outlier or a shift in voting intentions (this poll was taken up to September 12th, after all, while Ipsos-Reid and Nanos ran up to September 11th).

But another issue with the poll is its methodology. Polls generally just ask respondents for which party they intend to vote, and if they aren't decided towards which party they are leaning. There are some variations on how this question is asked (i.e. Nanos asks voters to rank their top two local preferences, Ipsos-Reid doesn't prompt for Greens, etc.), but it is generally the same.

Abacus is taking a completely different approach, at least at this stage of the campaign. They are asking respondents to rate their likelihood of voting for each party on a scale of 0 to 10, with the party receiving the highest score being considered the party that the respondent will vote for. In case of a tie, the respondent is considered an undecided.

This does a good job of gauging enthusiasm for each party, but does have some limitations. For example, someone could conceivably respond with a 9 for the PCs and an 8 for the Liberals and NDP, and be marked down as a decided PC voter in this poll. Another respondent could put the PCs at 10 and the others at zero, and also be considered a decided PC voter. But those two voters are very, very different.

But what this poll may be doing is recording what other polls cannot. With standard polls, it is up to the respondent to gauge whether they are decided or not, and whether they are leaning to one party or not. The decided voter in a standard poll might be the same as that voter who answers 10 for the PCs, while the leaning voter may be the same as the person who answers 9 for the PCs and 8 for the other parties. Or this method may somehow negatively influence how someone answers, compared to the standard method.

Whether this method has any merit or not is difficult to say. I think it is a worthwhile experiment, and I hope Abacus will continue it through to election day. Since it is not up to me to decide which methodologies are valid and which methodologies are not, I see no reason not to include this poll. And remember that ThreeHundredEight's weighting system does include the track record of each polling firm, so not all polls are considered equal.

Another poll out this morning is from Forum Research on the city of Toronto only. It finds that the Liberals lead with 39%, followed by the New Democrats at 30% and the Progressive Conservatives at 24%. Compared to their last poll conducted at the end of August, that is not much of a difference. If we look at Abacus's poll, they have the Liberals leading in Toronto with 38% to 35% for the PCs and 21% for the NDP. At the very least, we can say that the Liberals are leading in the city.

Before moving on to the Ontario projection, let's briefly look at the results of a Corporate Research Associates poll for The Guardian, Charlottetown's major newspaper. This is data derived from CRA's quarterly poll conducted in August.

It finds that the Liberals lead the PCs on every issue such as having a vision for the future of the province (40% to 18%), being able to handle economic problems (42% to 19%), dealing with the health care system (34% to 23%), and keeping a balanced budget (32% to 21%). What is interesting in this poll, however, is that on the vision question the PCs and Liberals are tied at 35% apiece in Kings County, the easternmost part of the island and the only part of the island that elected PC MLAs in 2007. Perhaps the party still stands a shot at more than one or two wins in the region. 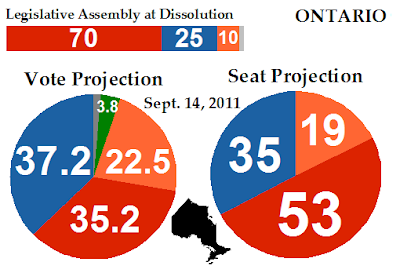 On to the newly updated Ontario projection. With this Abacus poll included, the Progressive Conservatives are back on top, gaining 1.1 points to lead with 37.2%. The Liberals have dropped one point to 35.2%.

In terms of seats, the Liberals have dropped two and the NDP one, with all three going to the Tories. That puts the Liberals at 53, one short of a majority, the PCs at 35, and the NDP back down to 19 seats.

The PCs have picked up two seats in Greater Toronto and one seat in Toronto itself, with the Liberals losing one seat in each region and the NDP one seat in the GTA. The Liberals are still projected to win a majority of seats in both regions, however. In and around Toronto, the Liberals dominate with 28 seats to six apiece for the PCs and NDP.

This is the first time that the PCs have gained in the projection, but as you can see in the chart above they are still well below where they were only last week.

The overlap for the two main parties is apparent in the chart above. 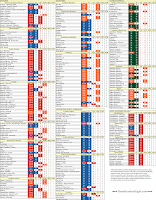 Unfortunately, the rumour of another new poll this morning did not pan out. For Ontario, I suspect we will hear from Angus-Reid this week and a poll out of Manitoba will have to appear at some point. The two Atlantic provinces are relatively quiet for the time-being, but I'm sure we will see something from both provinces before the vote.
Posted by Éric at 9:16:00 AM