After the second week of Ontario’s election campaign, the race between the Progressive Conservatives and the governing Liberals is still very close. But without the support of Toronto’s voters, Tim Hudak has little hope of becoming the province’s next premier.

A weighted aggregation of the latest polls indicates the Progressive Conservatives are still in the lead with 36.5 per cent support in the province, a drop of almost two points since last week’s projection. The Liberals are up almost a point and trail with 33.6 per cent, while the New Democrats are up 1.8 points to 23.9 per cent. The Greens have slipped to 4.8 per cent support.

Saturday's Toronto Star poll by Angus-Reid is the only new poll added to the model, the poll by Léger Marketing that appeared late last night for the QMI Agency will only be added tomorrow.

The Angus-Reid poll echoes the Léger poll that came out last night, indicating that the campaign has flipped again and that the Progressive Conservatives are back on top. But the performance of the NDP is worth noting. In the Angus-Reid poll, the NDP leads in the north (52%), in the Hamilton/Niagara region (40%) and, surprisingly, in the 416 part of Toronto (35%). The Liberals were at 34% in the city, however.

The Tories are ahead in southwestern and eastern Ontario, but the Liberals are ahead in the all-important GTA. As Adam Radwanski said yesterday, this points to a very messy result on October 6th.

The projection has shifted a little, but the ranges for the Tories and the Liberals are now overlaping to a great degree. 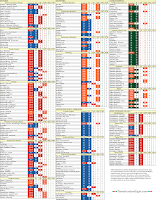 The details of today's projection are at The Globe and Mail site, but check back here tomorrow for a full update with the Léger poll. Also, I'll be appearing on Le Téléjournal Ontario tonight. It can be seen in most of Ontario at 6:00 PM and in the Ottawa region at 11:00 PM.
Posted by Éric at 8:19:00 AM