NDP may hold balance of power in Ontario

In the next Ontario legislature, the New Democrats could very well hold the balance of power.

With that comes both opportunity and risk for the party.

It has certainly been a very light polling week. There has been nothing since Monday. I suspect we'll get a flurry of polls soon, however, especially with the Ontario debate scheduled for Tuesday. Manitoba might have to wait until the last week or so of the campaign before we get any indication of what support looks like in that province. I've put a caution sign with the projection at the top of the page, because three months is a long time.

But there was one Ontario riding poll that appeared recently, in Peterborough This Week. It's a little short on the details, but it was apparently conducted by telephone sometime in the week of September 11 to September 17 for the riding of Peterborough, surveying 629 people.

The poll found that Liberal MPP Jeff Leal is on track to be re-elected with 45.5% of the vote, well ahead of PC candidate Alan Wilson, who clocked in at 28.5%. The NDP's Dave Nickle came up third with 22.0%. 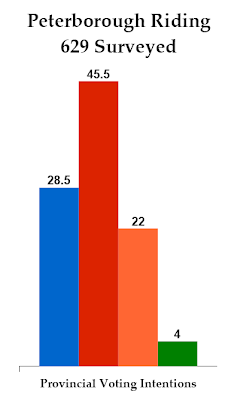 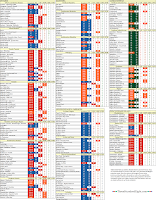 It also isn't too different from the current projection for the riding, which has the Liberals with 40% of the vote to 29% for the PCs and 24% for the NDP, so that is a positive sign for the projection.

I've updated the riding projection image, as the candidate information for Ontario, Manitoba, and PEI should now be up to date.
Posted by Éric at 9:19:00 AM