A pleasant surprise appeared yesterday morning, when MarketQuest Omnifacts Research released a new poll for the Newfoundland and Labrador provincial election, the first of the campaign.

MQO appears to be a newcomer, at least under this name. From what I can tell, this is a successor organization of Omnifacts Bristol, which we last heard from in the 2006 New Brunswick election. They actually did a good job of calling that result.

The poll finds that Kathy Dunderdale's governing Progressive Conservatives lead the pack with 53%, a result very similar to the Corporate Research Associates' latest poll. The New Democrats followed with 29%, an excellent result for them and, again, within the margin of error of the CRA poll. The Liberals followed in third with only 18% support.

On leadership, Dunderdale came out on top with 64% saying she would be the best premier. Lorraine Michael of the NDP was well behind with 22% while Kevin Aylward of the Liberals was at 14%.

Being the first poll of the campaign, this MQO Research survey takes up an enormous portion of the new projection for Newfoundland and Labrador. 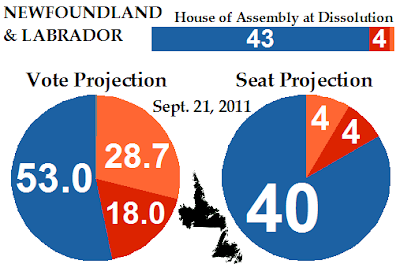 The Progressive Conservatives are projected to take 53% of the vote, down eight points from the September 1 projection. The New Democrats take 28.7%, up 11 points, while the Liberals take 18%, down 3.1 points.

This results in the Progressive Conservatives winning 40 seats, the Liberals four, and the New Democrats four. I believe that because of their having more of the popular vote the NDP would likely be called upon to form the Official Opposition, a first in their history.

It isn't a given, however. Parliamentary precedent exists that would bolster the cases of both the NDP and the Liberals. Being the incumbent Official Opposition, the Liberals may be called upon to stay in that role. It would appear to be up to the discretion of the Speaker.

The two seat gains for the New Democrats come in the Avalon and Burin region and the main part of the island. This gives the NDP one seat in each of the four regions.

Note, though, that current projections are based on parties running candidates in the same ridings as they did in 2007. The New Democrats are slated to run more candidates than they did in 2007, but I have to wait for the official candidate list before having the projection's list of candidates match the real one exactly.

Since the first projection on August 31, this has been a slow leak of seats from the PCs to the Liberals and now the NDP.

There are not a lot of projected close races, but the PCs and Liberals are each leading in two of them, the NDP in one. The PCs trail in three close races and the Liberals in two. 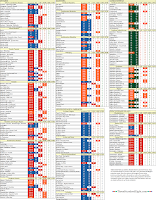 Having MQO Research active is great news for Newfoundland and Labrador polling, as that means we could have as many as three firms conducting polls during the campaign. I imagine the Corporate Research Associates will weigh in at least once, and NTV has been doing polls with Telelink of late. Hopefully we'll hear from all three of these firms soon.
Posted by Éric at 8:33:00 AM