PCs gain, but Liberals still poised for near sweep in PEI

The Charlottetown Guardian, which covers PEI like the morning dew, put out a new poll this morning for the provincial election scheduled to take place on the island on October 3rd.

The poll, conducted over the telephone by the Corporate Research Associates between September 23 and 27 and surveying 700 Prince Edward Islanders (amazingly, one of, if not the, largest samples ever taken in PEI), finds that the governing Liberals lead with 53%, down six points since CRA's pre-campaign poll conducted in August. The Progressive Conservatives are up five to 36%, while the NDP is down two and the Greens are up two to 5% apiece.

This is probably the only poll that will be released for PEI in this campaign. Thankfully, CRA nailed it in 2007 so let's hope they do so again this time around. 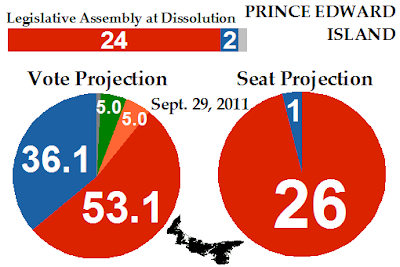 Being the only poll released during the campaign, it takes up virtually all of the projection. Accordingly, the Liberals are now projected to take 53.1% of the vote, with the Progressive Conservatives following at 36.1%.

The New Democrats and Greens are tied at 5% each.

If you look at the monthly provincial polling chart in the right-hand column, you'll see that movement is almost completely limited to vote swapping between the Liberals and Tories on the one hand, and between the NDP and the Greens on the other. It seems that in PEI the vast majority of the population switches between the two governing options, while a small minority can't decide for which fringe party they will cast their vote. In this election, the New Democrats are fielding fewer candidates than the Greens, so the odds that they will finish fourth in the popular vote again are decent.

There are no seat changes in the projection, with the Tories still winning their lone seat in the eastern part of the island (Kings County). If they are to win a second or third seat, it will happen there.

Whereas in the last projection the Liberal range included a sweep of all 27 seats, the Tory gain has given them a chance of winning two seats.

This puts the Liberal range at between 25 and 26 seats, while the Progressive Conservatives could win one or two seats. A complete Liberal sweep seems unlikely at this stage. 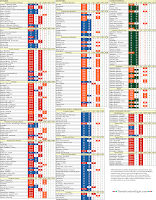 Final projections for Prince Edward Island will be posted Monday morning. As I don't expect any other polls to be released, they will not be any different from today's. However, as I was partly burned by the polls in the 2011 federal campaign, I am going to present some other possible scenarios on Monday taking into account past polling error.

According to what I have read in the Winnipeg Free Press, a Probe Research poll for Manitoba should be revealed tomorrow. So check here in the morning for the latest (and likely last) projections for that province.
Posted by Éric at 9:05:00 AM