Yesterday, the QMI Agency's network of newspapers released the results of a new Léger Marketing poll for Ontario, with one glaring error.

QMI reported Progressive Conservative support at 36%, Liberal support at 33%, and NDP support at 29%. That was wrong - the New Democrats were actually at 26% in the poll, with the Greens at 5% (rather than 2%). 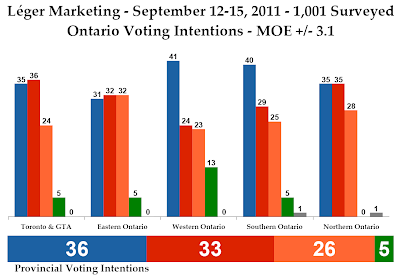 For the first time in the campaign, we are starting to see real consistency in the polls. Aside from having the Liberals up one point, Léger's poll is exactly the same as Angus-Reid's. Both were taken over the same days (with Léger stretching back one day further) and both used an online panel. I'm looking forward to a new telephone poll from Nanos or Ipsos-Reid this week to see how it lines up.

This is the same statistically insignificant lead that we've now seen in four of the last five provincial polls. The race is neck-and-neck between the Liberals and the Tories, but the New Democrats are slowly creeping upwards.

On leadership, the advantage lies with the Liberals. Dalton McGuinty topped the poll as the first choice for premier with 28%, followed closely by Tim Hudak at 26%. The NDP is still having some trouble getting Andrea Horwath out there, as she stands at 14%. This is the opposite of what we have seen at the federal level, where Jack Layton always outpaced support for his own party. 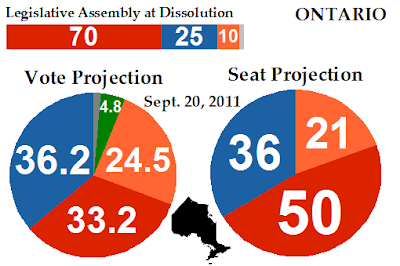 With this poll now input into the model, the Progressive Conservatives are projected to win 36.2% of the vote, with the Liberals three points behind at 33.2%. The New Democrats stand at 24.5%, while the Greens are at 4.8%.

That represents a drop of 0.3 points for the Tories and 0.4 points for the Liberals. The NDP has gained 0.6 points since yesterday. The Greens are unchanged.

There have been no seat changes. The Liberals are still projected to win a minority with 50 seats, with 36 going to the PCs and 21 to the New Democrats.

The seat ranges have shifted slightly. The Tories are unchanged, but the upper limit of the Liberals has dropped while the New Democrats could now win as many as 24 seats.

Both the PCs and Liberals could win as much as a majority government, but with an upper limit of 55 and 56 seats, respectively, and the minimum needed for a majority being 54 seats, both parties are unlikely to win more than half the seats in the province. The New Democrats are moving up in the seat ranges, but are not yet close to moving into second place in Ontario.

Over the weekend, I tested the vote projection model on the 2007 Ontario election. The results were positive, with the average error per party being lower than that of the average of the 2007's campaign last week of polling. I was happy to see it perform well, so as long as the pollsters are as good this fall as they were in 2007, the model should give an accurate result. 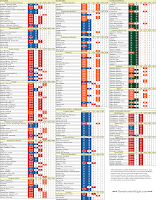 Manitoba is still gnawing at me, however. The last poll is three months old and the projection as it stands is horribly out of date. The closest race going into the series of fall elections has inexplicably yet to be polled. If nothing comes out of the province and, unlike PEI and Newfoundland & Labrador, I haven't heard a thing about an upcoming poll, I'll have to remove the projection for lack of information. We shall see.

Blogger has changed the way images are viewed. For the most part, I think it is an improvement but only if you don't need to magnify the image, as you must with the Riding Projections. One solution to this problem is to open the image in a new window (you can right-click to choose that option), but the best solution is to click on the Riding Projections image at the top of the right-hand column. That is always up to date.
Posted by Éric at 9:05:00 AM